Opening Day at Del Mar is an iconic mark of summer in San Diego, and more than 40,000 people are expected to attend the largest outdoor party in Southern California when the 76th racing season begins July 16. 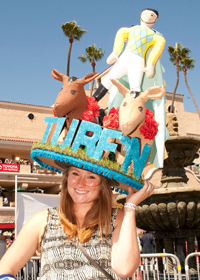 The event is known for its elegant parties and over-the-top fashion, culminating in the Opening Day Hats Contest.

The Party on Opening Day includes stretch run admission, access to the Seaside Cabana and Red Bull Tour Bus, gourmet food trucks, private wagering and a beer garden and cocktail bar for $30 per person. Want a reserved seat? Shaded stretch run seats and trackside dining tables are available from $25 to $65 per person.

For a complete event schedule and ticket information, visit dmtc.com.

Several new restaurants have opened around San Diego the past couple of weeks, including one that has been highly anticipated. A quick roundup:

Taking up two floors in the Ariel Suites building on Kettner Boulevard, the first floor will have a cocktail bar and patio with seating on a first-come, first-served basis. Reservations are required for the second floor and can be booked through the restaurant's website. As of press time, the next available table for two is on July 27.
http://bracerococina.com

• Civico 1845 is a new Italian restaurant that replaced Zia’s Bistro on India Street and is owned by brothers Dario and Pietro Gallo, who recently moved to San Diego from southern Italy. Aside from a wide prosciutto and cheese selection, homemade pastas, breads and meat dishes, the restaurant has several vegan entrees and desserts — a rare find in an Italian restaurant.

“Most people read ‘marinara sauce’ and think tomatoes, which are vegan-friendly. What they don’t realize is that the sauce is often made with butter, which is not vegan at all,” Pietro, who is vegan himself, said in a news release.

“We’re working with a number of vendors to make sure that our vegan menu is absolutely, 100 percent vegan.”
www.civico1845.com

• The former Western Steakburger space on University Avenue in North Park has been transformed into Breakfast Republic. Owner Johan Engman, who operates three Fig Tree Café locations and Café Cantata in Del Mar, brings breakfast to a part of town that is dominated by craft beer bars and gastropubs.

Along with traditional morning meals of Benedicts, omelettes and pancakes, diners can start their day with jambalaya, breakfast bacon mac ’n’ cheese, a Vietnamese chicken wing bowl or a beer-and-sausage sampler.

And because this is North Park, 20 craft beers are available on tap, as well as kombucha and “antioxidant shots” of fresh juices.
www.breakfastrepublicca.com

• Galaxy Taco, a new project by the owners of George’s at the Cove, is opening Monday a few blocks from La Jolla Shores.

Executive chef and partner Trey Foshee developed a menu concept that respects tradition, but includes his own spin on Baja cuisine.

Masa for tortillas will be made daily from scratch using a $10,000 corn grinder that was custom-made for the restaurant, and only non-GMO corn sourced from small farms in Mexico will be used.

Tacos range from fried fish to lamb barbacoa and Foshee’s special “The Tacolandia” — pork shoulder topped with cabbage-jalapeno slaw and pig ears. Diners can also opt for a tasting menu that includes a choice of ceviche, one taco, a Modelo Especial and shot of mescal for $28.

The drink list has several Mexican beers, mezcal and margaritas; the menu emphasizes that blended drinks are not available. Christine Riviera, who worked at George’s California Modern and won this year’s taco fight competition at The Blind Burro, will be in charge of the kitchen. www.galaxytaco.com

The city of Oceanside is celebrating its burgeoning restaurant scene with a new food festival and fundraiser on July 15.

Called “FEAST,” more than a dozen vendors, breweries and distilleries will gather at Old Mission San Luis Rey, the largest mission in California which dates back to 1798. Attendees get to choose which local nonprofit will benefit from their ticket purchase, and have the option to participate in a silent auction and raffle.

Tickets are $45 per person; the event is from 6-9 p.m. For a complete vendor list and ticket information, visit http://mslrfeast.com.