SD company elevates the cuisine at its seaside restaurants

Discerning diners are aware of the old adage that says “you can’t eat ambience,” and may be skeptical of booking a table at a restaurant known for having a scenic view and lots of tourist traffic, especially when you live in a beach vacation town like San Diego. The worries of winding up at a tourist trap and getting overpriced, subpar food come to mind.

But the owners of JRDN in Pacific Beach and the newly opened Cannonball on Mission Boulevard don’t rely on the restaurants’ prime oceanfront real estate to draw in diners. They’ve invested heavily in food quality and pay attention to feedback from locals.

“Design and location is important, but you’ve got to execute on the food,” said Brett Miller, CEO of Eat.Drink.Sleep., a local company that owns both restaurants. “There’s a lot of pressure on us to make sure that our most critical critics [San Diegans] are happy.”

The company has stepped up things at both restaurants by hiring DJ Tangalin as executive chef for JRDN and its complete overhaul of Cannonball at Belmont Park. 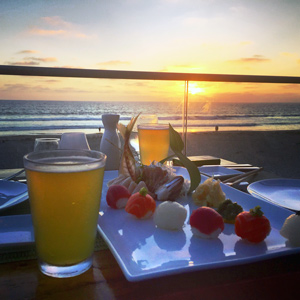 Cannonball, owned by Eat.Drink.Sleep., offers sushi and sashimi with a view in Mission Beach. Photo by Daniel Halimi/Special to The Daily Transcript

At JRDN, which is on the ground level of Tower23 Hotel in Pacific Beach, Tangalin added squash blossoms stuffed with goat cheese, grilled asparagus topped with pistachio salsa and salmon, crudos and oyster platters, and a “PB + J” entrée of foie gras with peanuts and berry jam to the dinner menu.

His ahi poke mixed with wakame (Japanese seaweed) topped with a tamarind rice cracker reflects his background as a chef in Hawaii, and his elegant plating style shows his classical culinary training and stints in kitchens such as Le Bernardin in New York and Volt in Maryland.

Miller said Tangalin took the previously esoteric menu and returned it to California cuisine, and emphasized the importance of catering to locals as well as visitors.

“Tower23 is a small hotel. It may not look that way from the outside, but it only has 44 rooms. So even when the hotel is filled, we can’t fill that restaurant. We really need the locals to dine with us,” he said.

“We reach out to everyone and say: We want be your go-to restaurant. We want to be that place that you take out-of-town guests to wow them, celebrate a special occasion, or just to go watch the sunset.”

The company took a more drastic approach with Cannonball in Mission Beach, a rooftop sushi restaurant near Belmont Park overlooking the boardwalk. After opening in 2013 for about five months, it closed the restaurant for a year-and-a-half to add an elevator and a glass-enclosed “sushi cube” indoor dining area, and expand the property to 9,400 square feet.

Miller said that praises have been pouring in with Cannonball’s expanded space and new menu, and the company decided to bring the food and beverage at its adjacent waterfront property, WaveHouse, to the same level. The large outdoor beach restaurant and bar will be completely rebranded and rebuilt, with work to begin in the fall.

“We have three iconic oceanfront locations in San Diego, and we’re excited about that,” Miller said. 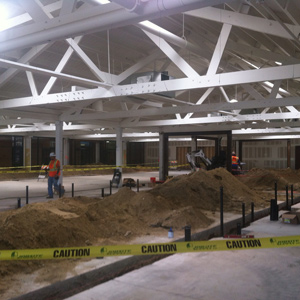 The new 22,000-square-foot public market is under construction at Liberty Station. The food hall will house 30 local vendors when it opens in the fall. Staff photo by Marie Tutko

Blue Bridge Hospitality, which is organizing the line-up of food purveyors for the new 22,000-square-foot Liberty Public Market in Point Loma — the city’s first permanent food hall — has announced the first group of vendors.

Venissimo Cheese (which has three locations around the county), Coronado’s MooTime Creamery and the popular food truck Pho Realz are also expanding to retail spaces at Liberty Public Market.

The $3 million space at 2816 Historic Decatur Road is set to open this fall and has the capacity for 30 vendors. Additional vendors will be announced, visit libertypublicmarket.com for more information.