A small, but fast-growing North County craft beer company is expanding operations and plans to open its fourth brewery.

Belching Beaver Brewery, which launched in Vista in 2012, recently announced it has bought a 24,428-square-foot industrial property in Oceanside. The $2.36 million space at 1334 Rocky Point will be a 30-barrel production site.

“The new facility will allow Belching Beaver the opportunity to increase production capacity from 12,000 to more than 60,000 barrels annually and meet some of that demand,” said Stephen Crockett of Lee & Associates, who represented the company, in a statement.

Belching Beaver has seven beers — such as a honey wheat ale, peanut butter milk stout and rye IPA — along with several seasonal and limited-release brews. Its beers are available at the original brewery in Vista and brew pub in downtown Vista, as well as a tasting room in North Park. The company recently started bottling its beers that are sold at stores throughout the county. 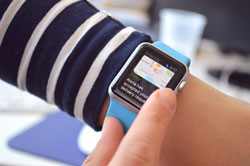 OrderUp, a new food delivery service, just launched in San Diego. Orders can be placed via the Apple Watch, iOS or Android, and the delivery driver’s location can be tracked. Photo courtesy of Contour PR

Over the past few years, many tech companies have been vying to establish themselves as the city’s dominant ridesharing company. The latest race for customers’ dollars is in food delivery.

OrderUp is the newest such company to launch in San Diego, giving residents in Pacific Beach and the San Diego State University area more takeout options than pizza. Food can be ordered on the website or via the apps for iOS, Android or Apple Watch, and be tracked from the time it leaves the restaurant to when it arrives at their front door.

“San Diego has so many amazing restaurants, yet so few offer delivery. Through OrderUp San Diego we’re connecting these restaurants to more consumers — from working families, to students on the go, to businesses looking to have food brought to the office,” said Andrew Kootman, who owns the San Diego franchise of OrderUp.

“In today's world, people are looking for convenience, along with transparency, and that is exactly what this technology provides,” Kootman said. “With our incredible technology, we average 28 to 32 minutes for deliveries every week; I dare to see if anyone has faster and more efficient deliveries than OrderUp.”

About 30 restaurants are available in Pacific Beach, including Backyard Kitchen & Tap, Kato Sushi and ice cream sandwiches from Cream; 35 restaurants serve the SDSU area. Delivery fees range from $1.99 to $4.99, according to the website.

The company says it has delivered 30,000 orders since entering the San Diego market, and plans to expand to North Park, Hillcrest and downtown San Diego.

OrderUp was founded in Baltimore in 2009 and operates in 38 cities. It was acquired by Groupon (Nasdaq: GRPN) in July.

A San Diego-based company has launched a new food delivery service, but this one is tailored specifically for businesses and company-lunch meetings.

Filthy Napkin, which was founded in March, is based in the UTC area and works with restaurants including Gaglione Brothers, Daphne’s California Greek and Tandoori Chef. Users can place orders via the website, or by texting or calling the company if a meeting is scheduled at the last minute.

Gavin William Naumoff, the company’s founder, said the job of ordering food for business meetings and lunches often falls on the receptionist or someone in an administrative position.

“They call [the restaurant or caterer] and they’re put on hold. They have to give a credit card over the phone. They have to figure out how much food to order and worry if it’s going to be enough. It can be a hassle,” he said.

Naumoff said Filthy Napkin makes ordering food for large groups of people easy. All of the menus posted on the website are catering menus, which notes how many people can be fed by each dish. Individual dietary restrictions, and gluten-free and vegetarian options are noted on the menus. Businesses can also send the company its weekly or monthly meeting schedule ahead of time and have lunch delivered regularly. Food can be ordered for a group of 10 or up to 2,000 people for an event, according to the website.

The company started by specializing in working with pharmaceutical representatives and now delivers throughout the county, Naumoff said. It recently launched a Kickstarter campaign to start a community kitchen that will provide cooking classes for children and adults. The company is seeking to raise $15,000 by Sept. 14 for the project.