A digital camera for photography enthusiasts 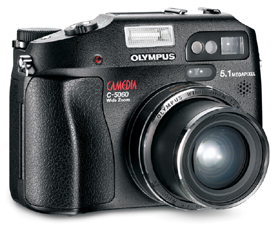 With the dozens of new digital models it's becoming difficult to distinguish one from another. It used to be that resolution was the best measure of quality, but with most new cameras now offering a resolution of 3 or 4 megapixels or more, other factors have become equally significant in determining overall performance. These include lens design, processing speed, exposure accuracy, auto-white balance, image contrast, color accuracy and noise filtering.

I've been trying out a new camera from Olympus (www.olympusamerica.com), the Camedia C-5060 Wide Zoom 5-megapixel camera, that seems to have gotten almost everything right. It delivers some of the best results of any camera I have tried, short of the thousand-dollar and up SLR models with interchangeable lenses. Not only are the images superb, but the camera is sufficiently compact, durable and light enough (just over 1 pound) to take almost anywhere. The camera is solidly constructed of magnesium with a stippled black finish and a nonslip grip that fits nicely in the hand.

The C-5060 is full of features that provide both fully automatic operation as well as complete manual control over the picture taking process. Its controls are intelligently laid out and easily accessed using almost a dozen on-the-camera buttons rather than relying entirely on display menus. These buttons used in conjunction with a thumb wheel make it easy and quick to access and change settings like exposure, flash mode and metering.

The C-5060 has a 4-to-1 zoom lens (equivalent to 27mm-110mm on a 35mm camera). This lens' much wider angle makes it perfect for taking both scenery and interior images for architectural and real estate use. The lens can also focus as close as 1 inch in its super-macro mode. Priced at $699 it is an excellent value considering its performance and capabilities.

Other features include three types of light metering, sharpness and contrast settings, exposure bracketing, Quick Time movie mode, panoramic mode and auto bracketing. Composing is done using an optical viewfinder or the 1.8-inch LCD viewfinder that can rotate into a variety of positions, from folded up against the back to positioned above the camera. You can photograph a subject looking upward while holding the camera over your head, looking downward while holding the camera at waist level or straight ahead.

In weeks of shooting, the images were consistently contrasted, sharp and well exposed. I got some terrific shots of indoor interiors and large groups of people using the optional automatic FL-20 TTL flash ($199), which fits onto its hot shoe. The camera also works with other brands of flash units. The Olympus C-5060, with its 5-megapixel sensor, produced results that were as good or better than those taken with sensors with greater pixel count. This camera proves that megapixel count alone is not the only criteria for obtaining excellent results.

The C-5060 accepts both a Compact Flash memory card (Type I and II) and the newly introduced tiny xD-Picture Card. I used a 1-megabyte Compact Flash-size IBM Microdrive that holds more than 800 images at the maximum resolution of 2,592 by 1,944 pixels.

Like most cameras of this class, it has program, shutter priority, aperture priority and manual modes. There are also five preset scene modes including night, portrait and sports. Its maximum aperture is f2.8 and the shutter speeds range from 1/4,000 second to 16 seconds. The camera also allows you to set up several of your own preferential settings, called My Modes, and access them quickly.

This week a number of new cameras and related products will be introduced at PMA, the photographic industry's annual trade show. In next week's column we'll take a look at some of the most interesting of these products.