Two for the road

While returning from a business trip I bumped into a friend at the San Diego airport, and seeing my large computer bag, he joked that I must be carrying a printer along with my computer. Well, that was the one thing that was not in the bag, but it got me thinking about portable printers. With all the miniaturization of notebooks, what's happening with portable printers? 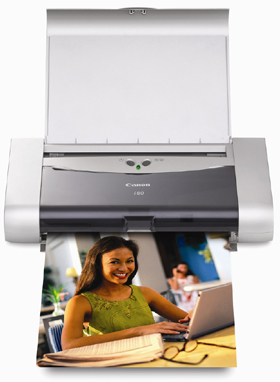 The answer is a mixed bag. While the printers aren't shrinking in size at the rate of notebooks, they have become capable performers rivaling desktop printers.

Both are similar in appearance, but there are some differences in performance. While they have the same shape and each weigh a little under 5 pounds, the Canon is an inch thinner and more stylish, measuring 12 x 7 x 2 inches compared to the HP's 13 x 6.5 x 3.2 inches. The Canon will fit more easily into a briefcase, but it's not something I'd want to carry around all the time.

These printers are targeted for those that travel and need hard copy output. That includes those wanting to leave a printed form, contract, estimate, or application behind, such as home inspectors, appraisers and insurance salesmen, real estate agents who need to print out home listing information on-site, and those that are on the road much of their time.

They are useful to create a PowerPoint presentation while away from the office or print maps and driving directions from a computer while on a long road trip. With the ease of accessing information wirelessly from the Internet, being able to print it out from wherever you are can be convenient.

The printers are also useful where there is limited space in an RV or boat, or where power is unavailable and a battery-powered printer is needed. But you pay for this convenience; these printers are more expensive than many larger ones that often have more features.

Both the HP and Canon printers use two cartridges, a tri-color and a black and white. But the HP requires a third "photo" cartridge, which replaces the black and white cartridge when printing photos. The unused cartridge is stored in a special case that is designed to prevent the ink from drying out and leaking, an inconvenience because it requires you to carry something extra that you don't want to lose.

The HP cartridges have a higher capacity than the Canon's and cost commensurately more. There is not a significant difference in the price per copy.

Surprisingly neither includes a USB cable, requiring you to purchase one separately. I think that's being petty considering they cost the manufacturer about a dollar. HP includes a parallel cable which few will have need for.

Both products offer multiple ways to connect to a computer including infrared and a Bluetooth option. Canon has the capability to print directly from any camera that has the PictBridge feature or from Canon's compatible digital cameras, using the LCD screen on the camera to make selections and adjustments. The HP 450 will print from images on a PC card but there's no preview.

I've been trying out each of the printers this past week producing a variety of output. I found that black and white text documents were of comparable quality, but the Canon printed more quickly, 3 seconds vs. 6 seconds for a one page black and white memo and 1 minute vs. 1 minute 20 seconds for the Yahoo home page. Printing high quality color images on photo paper was faster and better with the Canon. A high-resolution photo took 3 minutes to the HP's 6 minutes. The color images from the Canon were superior to the HP's in terms of contrast and clarity. And the HP has the inconvenience of requiring one cartridge to be switched.

With that said, the HP is no slouch. It performs well, and is less expensive. Fully loaded with battery and Bluetooth the HP costs $349 vs. the Canon's $410 and still does a credible job.

In summary, both meet expectations and are competent performers, but I prefer the Canon for its much faster output, thinner profile and better photo quality.