Robotic vacuums not yet substitute for human touch

What do you get when you cross drudgery with high technology? A robotic vacuum cleaner that wanders around your home picking up dirt. Considering vacuuming is not one of my core skills, I thought this could be a way to contribute to doing one household chore that I've avoided for years. My wife was skeptical. 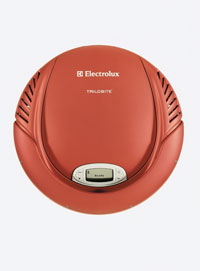 The Trilobite from Electrolux

I've been testing two of the latest products, the Trilobite from Electrolux (Nasdaq: ELUX) of Sweden (www.electrolux.com) at $1,795 and the Roomba Discovery (www.irobot.com) at $249, released this week from iRobot of Massachusetts.

Named after a prehistoric creature that roamed the ocean beds feeding off small animals, the Trilobite is a sleek, cranberry red, disc-shaped device about a foot in diameter and 5 inches high, weighing 13 pounds. The device first traces the room's perimeter, mapping out its shape, and then cris-crosses the floor to do the cleaning.

Ultrasonic detectors that "see," and a pressure-sensitive bumper prevent it from crashing into anything. As it approaches an object, it stops and turns to avoid hitting it. In the few instances it does hit something, it does so gently.

On a few occasions it ran into trouble, getting caught on the sliding glass door track and on the tapered base of a lamp. If it's unable to get unstuck it turns off. Most of the time it successfully maneuvered around all sorts of obstacles, the legs of a table and chairs, cords, lamps, planters and even the dog's food dish. If you're trying to clean one room it's best to block off its entrances by either closing the door or using supplied magnetic strips; otherwise it may wander into another room on its own.

One of its cleverest features is its charging station, which sits against the wall. The Trilobite will usually find its way back to it once its battery is low. It docks, recharges, then takes off again to continue cleaning. Charging time is a couple of hours for about one hour of operation. In addition to the normal cleaning mode it has a quick setting, which cleans quicker by skipping the perimeter mapping, and a spot setting to clean an area of about 3 square feet.

So how well does it work? It did a good job of picking up dirt and didn't miss any of the dry cereal I sprinkled around the room as part of my test, except at the edges of the room and near objects. But overall, I had a lot of fun using it; it almost seemed human, with a mind of its own.

iRobot has sold about a half million Roombas in the past few years. This new model adds a number of features, including a sound sensor that detects a dirty area, causing it to spend a bit more time there.

Similar in size and shape to the Trilobite, it's about half the weight. It also has a docking station that's supposed to work like the Trilobite, but the Roomba failed to dock on several occasions. The Roomba is less powerful and about 6db quieter. It's well constructed, but less substantial than the Trilobite. One major difference is that it is "blind," relying on its bumper to detect obstacles. It finds its way by bumping into an object and then turning away. It didn't damage or mar anything, but watching it reminded me of a bumper car at an amusement park. On one occasion it got caught on the cord of a floor lamp, causing the lamp to tip over. So it's good to be in the house while it's at work.

The Roomba comes with two battery-operated guides that shoot a beam across the room entrance. The Roomba will not cross the beams. This method is more convenient than the magnetic strips used by the Trilobite. One annoyance was some of the cereal picked up spilled out when I lifted and tilted the Roomba. Battery life was slightly less than an hour.

Both products are more like powered electric brooms than high-powered vacs, using rotating brushes and some suction to pick up the dirt. They both move from carpet to floor easily, and each offers several cleaning modes. Each takes three or four times longer to vacuum a room than doing it yourself, and neither eliminates the need for an occasional major vacuuming using a conventional vac. But both work well and live up to their claims.

The Trilobite is more sophisticated, rarely bumps into things, and gets stuck less often. Its design is more rugged and its suction more powerful. It should be for its $1,500 higher cost. The Roomba makes some sensible compromises to keep its cost down, but also does a good job. If money were no object I'd buy the Trilobite; otherwise I'd buy the Roomba.

What does my wife think of these? Another gadget for the home that does have some benefit, but not a substitute for my doing the real vacuuming.

Now if I can only find a robot to take out the garbage.