The new Razr phone, which deserves an award just for its name, has become Motorola's biggest hit since 1996 when it introduced the StarTac, one of the most successful mobile phones in history. I know devoted StarTac users that buy older units on eBay just to ensure they'll always have one that works. Now they have a new product to lust over. 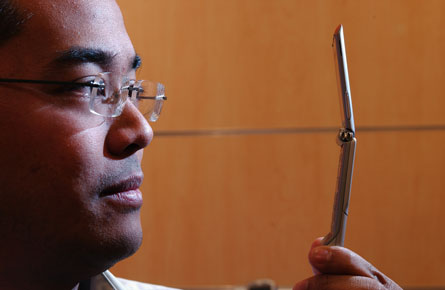 The Razr V3, its official name, is a flip phone like the StarTac, with a form factor and construction that sets it apart from the hundreds of new models introduced each year. Photo: Bloomberg News

As its name implies, it's thinner than most phones by about 40 percent, just half an inch. Yet it's wider and a little longer than other flips, 3.8 inches long by 2 inches wide. That allows it to have a large screen and a bigger keyboard. It's small and light enough to drop in a pocket, weighing just 3.5 ounces.

The phone is constructed mostly out of aluminum and exudes quality. Despite being so thin, it's rigid, doesn't twist and snaps closed with a solid thud. The Razr costs a pricey $499 from Cingular with a 2-year contract. (That's $50 more than the new Treo 650 that Cingular introduced this past week.) But check online sites like Amazon, where the price is rapidly falling to less than $300 with rebates.

While the form factor is unquestionably its strong point, how good a phone is it?

The Razr's display is excellent. The 2.5-inch full color photo-quality LCD is large and bright. However, it's difficult to read under direct sunlight outdoors.

The keyboard is formed from a single sheet of nickel-plated copper giving a silver sheen. The numbers and letters are chemically etched through, and U-shaped cuts around each key allow the keys to flex down as you push them. While the keys cannot be located by touch, they're nicely separated, have good travel, and are backlit and framed in neon-blue adding to its attention-getting futuristic look. Because the buttons lie flush, they're slightly more difficult to activate than raised keys.

The VGA camera is no better than those found on $100 phones. There's a date book, alarm, calendar and calculator, a decent speakerphone and a hefty address book capable of holding 1,000 names. The address book is somewhat cumbersome to use, and the Razr does not come with any means for syncing your contacts with a computer, an oversight if this phone is intended for the business user. Motorola (NYSE: MOT) sells a synchronizing kit called Mobile Phone Tools, but it's somewhat difficult to use and costs $50 to $70 extra. It should be included with the phone if Motorola expects you to use the 1,000 entries. If syncing with Outlook is of prime importance, you may be better off with a Treo 650 or a phone running Microsoft's (Nasdaq: MSFT) phone software.

The phone is Bluetooth enabled for use with a Bluetooth headphone and computer. One of the first things I did was to use Bluetooth to connect to my Mac, drag a family photo onto the phone, and set it as my wallpaper screen. If only my contacts were as easy to move over. I tried Motorola's HS820 Bluetooth headset and it worked adequately, although having the mike near the ear makes any headset prone to pick up background noise. The Razr doesn't have the standard jack for wired headphones, an omission if you prefer using any of the popular wired headphones available. Motorola's Web site offers one basic wired headset for $20.

The Razr is one of the first phones to have a USB connector for charging, so you can charge it off a notebook instead of carrying a separate power adapter. Battery life is rated at about seven hours. With my frequent use I needed to recharge it every 2-3 days. The battery occupies about a third of the phone's volume.

My phone came with Cingular service, but it also worked with a SIM card from AT&T (NYSE: T) and T-Mobile. (You may need to ask Cingular to unlock the phone if you decide to buy it from them and use it on another carrier.) Call quality and sensitivity were excellent. It is a quad-band phone, allowing it to work most anywhere in the world.

My conclusion? If syncing with Outlook is less important to you or you don't have that many friends, this is a great phone. Of course, showing off this phone is a great way to make new friends.

Otherwise, the Razr looks sharp, has a great form factor, is sturdy and an excellent performing phone. Expect to see other cell phone companies working to build even thinner products, and look for an entire line of Razr phones from Motorola this fall.