Computer accessories have become a multibillion-dollar industry led by companies like Logitech (Nasdaq: LOGI), Belkin, Targus and scores of others selling millions of mice, keyboards, cases and other gadgets. Part of its growth is driven by the much higher margins retailers get for many of these products compared to the razor-thin profits from computer sales. This week I look at a sampling of some recently introduced accessories that are useful or at least intriguing. 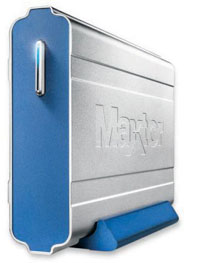 OneTouch II is Maxtor's (NYSE: MXO) latest back-up drive designed to be simple for even an inexperienced PC or Mac user. Maxtor (www.maxtor.com) has removed most of the excuses for not backing up our computers, which many of us still don't do on a regular basis. Once the software is installed, just push the glowing blue button on the drive. The backup runs in the background and, depending on the size of your drive, takes a couple of hours to complete.

This latest version lowers the price to about $1 per gigabyte and now runs faster and quieter than earlier models. The 250 GB model, selling for $249, can hold thousands of hours of music, thousands of photos and a backup of most entire disk drives. It comes with software from Dantz, a company whose software I've found to be complex to use. But this latest version has a simpler Maxtor interface so you never need to see a Dantz menu. The drive can sit on its edge so that it takes up hardly any space. The 3.5-inch, 7,200-rpm hard disk drive is packaged inside an attractive aluminum housing and has both a USB 2.0 and FireWire connection. It's one of the simplest and most cost effective solutions available for back-ups. 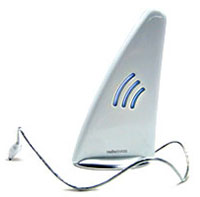 The radioShark from Griffin Technology (www.griffintechnology.com), a company known mostly for its stylish iPod accessories, is a device that lets you play radio broadcasts through your computer's speakers as well as record them on your hard drive, much like a VCR. It costs $79.

The shark fin-shaped object connects to and is powered by the USB port. The software displays an image of a radio with a tuning scale and buttons for AM/FM band selection, volume, etc. You tune to a station by dragging a pointer along the dial or by creating presets of your favorite stations. Its main benefit is to record programs unattended, much like a VCR. You can also backwind up to 30 minutes while listening live.

Other than the recording feature, there's little value over using a simple $20 radio. I also prefer to listen to radio stations accessed through the Internet (by going to the stations' Web sites) and to use a software utility to record the programs. That way you're not limited just to San Diego stations, and the reception is far better. The radioShark might be useful for those that can't bear to miss their favorite talk show, but I can't recommend it for recording music. It has poorer sound quality than music downloads or CDs and is expensive for what it offers.

Docking stations make it easy to quickly connect all your peripherals to your notebook. Targus (www.targus.com), which has one of the broadest lines of docking stations, just released the first that has a video connection to an external monitor. The Universal Notebook Docking Station costs about $149. While most dedicated docks work through a large proprietary connector on the computer to carry all the signals, this product does it all through a single USB 2.0 port. (You'll need to plug the power adapter directly into the computer.)

The 11x3x1 inch dock has nine connectors along its back, including the video port, Ethernet jack, serial port, stereo audio out for speakers or headphone, an audio-in jack for a microphone, and four USB 2.0 ports (two with twice the normal power to charge accessories). It sets up easily and worked well with both a Mac and PC.

Kensington recently introduced the Laptop Desktop USB, an $80, sleek-looking stand and docking station in one, into which you slip your open notebook vertically. The dock hides the notebook's chassis and 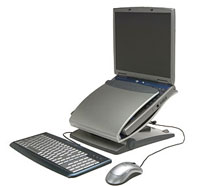 keyboard, and the screen emerges from the top. An external mouse and keyboard connect to it using two of its four USB connections, turning the notebook into a desktop computer with LCD monitor. You can adjust the height of the screen and the tilt. It's a good way to have your notebook do double duty, as a portable and then as an office computer when you're in the office. A problem when used with some notebooks is that the front edge of the notebook is engulfed by the stand so if your computer has a CD/DVD tray on its front you need to remove the computer to access it.

If you're looking for a true docking station I prefer the Targus. It has all the connectors you'll ever need. For an attractive stand that converts your notebook to a monitor and uses an external keyboard and mouse, the Kensington works well, but the other connections to the notebook need to be made separately.

Talk Back: Send a Letter to the Editor

Subscribe to The Daily Transcript. San Diego's Technology News Leader. On your doorstep from $2.86 a week.

Baker has developed and marketed consumer and computer products for Polaroid, Apple, Seiko and others. He is the holder of 30 patents and was named San Diego's Ernst & Young Consumer Products Entrepreneur of the Year in 2000. Send comments to phil.baker@sddt.com. Appropriate comments may be published as Letters to the Editor.