By Phil Baker, Special to the Daily Transcript
Monday, August 12, 2013

In 1991 Michael Tchao and Steve Capps originated the idea for the Newton and convinced Apple’s CEO, John Scully, to let them build it. Scully coined the name “PDA” for this new device used as a personal digital assistant to manage your address book and calendar and run its version of what we now call apps.

The Newton was full of amazing technologies never before seen in a consumer product. I was part of the team of nearly 200 that worked over a span of five years to create this pocket-sized device.

When the Newton MessagePad 100, debuted at the Consumer Electronics Show in Chicago in 1993, we all waited with nervous anticipation for the initial reviews in PC Magazine, PC World, The New York Times, The Wall Street Journal, Time and Newsweek.

In spite of our misgivings during the development, we thought some of the weaknesses we knew of might not be serious enough to be noticed or perhaps be overlooked. After all, you rationalize; you’re so close to the product, maybe you’re being overcritical.

And, in fact, the early reviews were encouraging. The reviewers, mostly technical geeks, raved about how the Newton would turn scribbles into perfect squares and circles, and how it would understand you when you wrote “Meet Michael for lunch on Monday” and create an appointment for Monday at noon on your calendar. They even raved about the handwriting recognition. While it didn’t always work, if you wrote carefully, you could see how it magically turned cursive writing into clearly printed text. 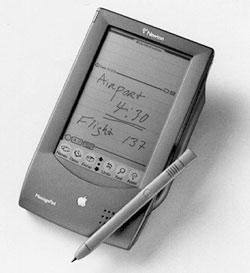 The Newton MessagePad 100 debuted in 1993; it sold just a few hundred thousand and is now considered a failure. Photo courtesy of Apple

But the excitement and the early glow wore off as reviewers dug in more deeply and the first customers began experiencing problems, particularly with its inability to consistently recognize their handwriting. That weakness became the butt of jokes in Garry Trudeau’s “Doonesbury” cartoon and on the late night shows.

In the end, the Newton was a big failure; instead of the millions expected to be sold, sales reached just a few hundred thousand. The Newton had so many new features that perhaps it was inevitable that it was shipped before all of them could be perfected. While subsequent models performed better, it was too late to change the early impressions.

While Newton was ahead of its time, many of its features eventually appeared in other products, including the Palm Pilot, the iPhone and the iPad. Its software was the first to understand the context of what was written. It had one of the most advanced touch displays using a stylus, and it never required the use of a save command.

I just returned from the 20th anniversary reunion of the Newton group held in Cupertino in the shadows of the Apple campus where we all had worked. About 150 alumni attended to celebrate the adventure that we all remember as if it were yesterday. It reminded me that rarely have I encountered such a smart team so dedicated to the success of a product, and so unified in its efforts.

As one of my former co-workers, Vikki Pachera, put it at the reunion:

“Maybe because we drank too much Kool-Aid, or because the leadership was inspiring, or that the technology was so magical, we were deeply committed to each other’s success and the success in meeting our goals. It was a ‘do or die,’ ‘never say never’ environment that made the impossible possible.”

While team members have gone on to do new things, they’ve made a huge impact in the tech world as shown by the list below. It’s just a sampling and is not meant to be comprehensive.

Where are they now?

• Michael Tchao became general manager of the Nike electronics products division and eventually came back to Apple to lead the marketing for the iPad.

• James Joaquin, who worked in marketing and business, went on to co-found When.com, a consumer Web calendar service that was acquired by AOL. He then became CEO of Ofoto, the first online photo development site, which was acquired by Kodak. He’s now a partner at Catamount Ventures.

• Subra Iyer, who worked in business development, co-founded and became CEO of Webex, an online conferencing software that was acquired by Cisco.

• Donna Auguste, who ran the software organization, and John Meier, a software engineer, co-founded Freshwater Software in Boulder. Five years later it was acquired by Mercury Interactive, which was then acquired by HP. Donna then did philanthropic work in developing countries for 12 years and is back in high-tech as co-founder and CTO of another startup in Denver.

• Robert Brunner, who headed up industrial design, created one of the hottest ID companies in San Francisco, Ammunition Group, which has become known for the striking designs of Beats headphones.

• Scott Petry, another marketer, went on to found Postini, a business email company that was acquired by Google.

• Rex Smith, who worked with me in hardware engineering, left Newton to join his son to create Hotmail, the email company acquired by Microsoft.

• Jony Ive, who was the industrial designer for the second Newton, the MessagePad 110 that I lead as program manger, was instrumental in designing the iPod, iPad and iPhone, and is now Senior VP, Design at Apple.

• Mike Culbert, the hardware genius behind the Newton, stayed on at Apple to work for Steve Jobs and invented many of the features of the iPhone and iPad. Sadly, he passed away this year of cancer.

• And then there’s me. I co-founded Think Outside that developed the folding keyboard for Palm Pilots, something the Newton could have used. In addition to helping other companies develop their technology products and writing this column each week for the past 10 years, I wrote “From Concept to Consumer,” which includes many of the lessons I learned from the Newton. I’m now part of a small team that’s developing the next big thing in music.

The Newton group was eventually shut down in 1998 when Steve Jobs returned to Apple and eliminated nonessential projects in his turnaround effort. While he was critical of the product at the time, we would all like to think it gave inspiration to the iPad and iPhone.


Baker is the author of "From Concept to Consumer" published by Financial Times Press. Send comments to phil.baker@sddt.com. Comments may be published online or as Letters to the Editor.
View all 3 comments
User Response
3 UserComments
Colleen Martell 10:38am August 14, 2013

Great review of the Newton and the people behind it, Phil!

Thanks for the recap - very great to read about the contributors of one of the most inspiring products I've ever used. I had one of the 1st to go to consumers via a university purchase program and loved it from day one. I still miss Mr. Advisador and have been thinking of bringing him back for iPhone.

That's quite a distinguished group.But I'd rather forget Gaston Bastiens, one of the few people in the tech industry whom I met and instantly and strongly disliked--as it turns out, with good reason.