Buy phone hardware, then US calls are free

Using the Internet to make phone calls is nothing new, but it’s had a mixed reception because of unpredictable call quality. I use Skype several times each week and often need to reinitiate a call due to poor quality. And my early experiences with Vonage were also trouble prone: voice breakups, echoes, and delays.

So it was with some wariness that I began using Ooma’s VOIP (Voice over Internet Protocol) telephone service. However, for the past week every call has been clear and as good as calls made with my landline phone.

And that’s a good thing, because the carriers are putting fewer resources into supporting our old landline phones. My friend, Joe Brancatelli — who also links this column to his subscribers at www.joesentme.com — told me of his frustrations with his Verizon landline service in his Hudson Valley (New York) home.

The company just stopped supporting his phone service; he had to go to the New York State Public Service Commission to get help. Then Verizon raised his rates by $30/month. Apparently, Verizon is hoping its customers will just move on to cellular. But cellular is not always reliable, has pockets of poor service and drops call when a tower is shared by too many users. 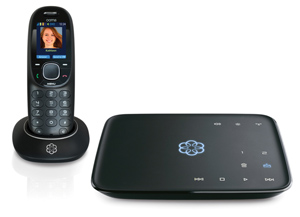 The Ooma Telo is a flat electronic box with illuminated touch buttons on top. It plugs into your router and a phone plugs into it. It costs $150, or $210 with a cordless phone. Courtesy photo

There are numerous VOIP services you can find that use the Internet to make free calls. The service typically runs from $15 to about $35 per month (including all taxes and fees), plus occasionally additional fees for special features. Ooma offers a unique proposition: free domestic calling (you do need to pay $4-$6 per month for taxes and access to 911, depending on your state). The catch is that Ooma requires that you buy its hardware, the Telo box, to access the service.

The Ooma Telo is a flat electronic box with illuminated touch buttons on top. It plugs into your router and a phone plugs into it. It costs $150, or $210 with a cordless phone.

Setup was straightforward, although I encountered one problem that I see happening more and more, and that makes me wonder if companies do real user testing: I was required to type in the user ID printed on the box, but the random mix of letters and numbers and the fonts used made it impossible to distinguish a zero from the letter O, resulting in several failed attempts. Fortunately, that was the hardest part.

After registering, just select a local phone number online. This will be your new number that you will need to give out. (In my case I simply linked it to my Google Voice number that I give out, and this phone now rings, along with my others, whenever anyone calls my Google number.) It’s also possible to port your current landline phone number for $40.

When you plug in the Telo to your router, it starts up and configures itself. In my case, it went through a 15-minute software update, before the ready light turned on. Then plug in the Ooma cordless phone or any other phone into the back of the Telo and you’re ready to make or receive calls.

You can also add an optional $50 Ooma Linx box that lets you wirelessly connect additional telephones or a fax machine that are not in the same room as your Ooma box. For example I could connect my wireless Panasonic phone system in the kitchen to a Linx box, and all of the Panasonic phones in my home can make and receive calls through the Ooma in my office.

I used the Ooma cordless phone throughout my home without any problem. It worked much like other cordless phones. Additional phones cost $60.

I was able to dial numbers within my 858 area code without using the 858 prefix or with the 1-858 prefix. 911 also worked fine. The 911 operator was able to identify my home address and the Ooma phone number and call me back. Ooma also provides many of the services we get with a landline, such as caller ID, call waiting, and voicemail.

Ooma attributes its high call quality to more effective voice compression than standard VOIP. And it seems to work just as well while you’re doing other things on your network. I tried making calls when downloading large files with no difference in either. The calls are digitized and encrypted, which makes them more secure than ordinary calls.

Ooma offers the free basic service as well as a Premier service for an additional $10/month. The Premier plan offers many additional features such free calling to Canada, voicemail-to-text, three-way conferencing, filtering of spam calls and more. (Note that you have to opt out of this plan when you sign up to avoid being charged at the end of the free trial.)

An international calling plan provides 500, 1,000 or an unlimited number of minutes of calling every month to landlines in over 60 countries worldwide — but just to mobile phones in 12 countries — for $5, $10 and $15 respectively.

Ooma has been around for seven years, originally with more expensive hardware, and has received thousands of online reviews as an effective way to save hundreds of dollars each year on phone bills without sacrificing call quality. My limited experience was equally positive.

I’ve been ready to dump my AT&T landlines, which cost me $200/mo for three lines, but my wife believes that landlines are less likely to fail during emergencies. There’s probably some truth to that, particularly since we have experienced cellphone failures and power outages, leaving us only with a landline.

But if that’s less of an issue for you, Ooma is a great way to save hundreds of dollars a year with no sacrifice in call quality.

I enjoyed your article promoting Ooma. However, my experience was not nearly so enjoyable as yours. We purchased an Ooma hub (for around $399) in '09 and were promised that, from that day forward, the service was absolutely free--no fees, no taxes, nothing, ever. That, my friends, was a lie. They disabled our hub device knowing that we would eventually contact their service people--after spending hours fiddling with all of the connections and the modem and router settings--and when we did contact them they told us that the deal is off. Pay a monthly fee if you want your gizmo turned back on. Sorry, that's just the way it is. So, go ahead and trust them if you want to, but be forewarned. Just because someone tells you it is free, they might change their mind. I had better use up all of those "forever" stamps I bought before the Post Office changes their mind and wants an extra dime every time I use one.