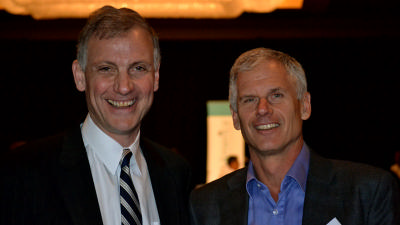 Varroney, who most recently served as the president and COO for Newt Gingrich’s American Solutions for Winning the Future prior to his current appointment, also said, “We want to see technology get back to where it was and really drive up to a full third of gross domestic product growth.”

To achieve this end, the organization has already sent recommendations to the congressional supercommittee, the group tasked with finding up to $1.5 trillion in budget savings over the next 10 years, which included proposals on tax reform, strengthening R&D spending, increasing the amount of work visas for highly educated immigrants, as well as finding ways to use technology to reduce waste.

But for an economy that Varroney admits is in a period of “flat to slow growth,” the acting head of the D.C.-based group believes the best way to get it moving again will come from encouraging new innovations in technology.

The organization will also be taking its proposal before the national platform committees of both parties ahead of the 2012 elections next year.

“We’ll be asking both committees to adopt our agenda," Varroney said. "We really feel that it is not only the key to job creation in the present, but also in the future.”

To that end, the winners of TechAmerica’s 18th annual High Tech Awards will most assuredly play a big part in that future, as executives from more than 500 technology firms descended upon Hilton Torrey Pines on Friday to honor some of San Diego’s finest technology companies.

A total of 10 winners were selected from an impressive field of hopefuls that included local heavyweights, such as Qualcomm Inc. and ESET, for their technological acumen in nine separate categories.

Taking home honors for its work in Software was Oceanhouse Media. This company, based in Encinitas, specializes in developing mobile book applications for children, and has already been recognized for its work in bringing many of Dr. Seuss’ stories into the modern era.

Sorenson Media took home the prize for Internet/Web Commerce for its suite of media encoders, while AgigA Tech Inc. and One Stop Systems shared the prize for Computers & Related Products.

ServiceNow was awarded the prize for Software as a Service/Cloud with its IT management line of products. Fred Luddy, company founder and chief product officer, also offered a bit of advice to the crowd, saying, “Follow your dream, and you can do it in San Diego.”

Other winners from the event included: MicroPower Technologies Inc., which won the award for Communications Products & Services; Creative Electron Inc. in the category of Semiconductors/Industrial & Analytical Instrumentation; ecoATM for its work in Clean Technology; Outsource Manufacturing Inc. — Made in San Diego won the IT Service/Contract Services award; and FieldLogix rounded out the list of winners in Outstanding Emerging Growth.