Sunday is Veterans Day. For me it is a day of intense emotion. It's a day my wife often asks if I'm OK. She has no way of knowing the events that I relive.

Thirty-nine years ago today I laid in a hospital bed at the 106 U.S. Military General Hospital in Yokohama, Japan. Six weeks earlier I had been evacuated from Vietnam following a rather minor combat wound that had become infected with, among other things, something we grunts called "jungle rot." The doctors had decided that there was a higher probability of success in treating this stuff if I were out of the tropical environment of South Vietnam.

I fully expected to return to my unit in Vietnam and complete my tour. After all, I was a paratrooper with the famous 101st Airborne Screaming Eagles -- "No Slack," "Strike Force," "Widow Makers." My battalion commander, Lt. Col. Charles (Chargin' Charlie) Beckwith was expecting my return. Col. Beckwith would later chronicle this time in Delta Force, a book mostly about his command of the failed rescue attempt of the hostages in Iran. 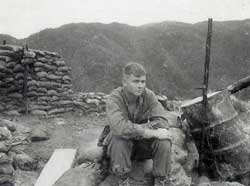 The author, Timothy Lickness in August 1968 at a forward fire support base in the mountains above the A Shau Valley.

As it turned out I never returned to my unit. I never went back to Vietnam. Instead six weeks later I would return to "the world." Back home after nearly two years overseas.

As I lay in bed I thought about what it had been like to be in Vietnam in 1968. The actual reporting of the war had been subsumed by other events like the assassinations of Bobby Kennedy and Martin Luther King, Jr., the anti-war demonstrations at home, and the Paris peace talks with its mind-boggling dispute over the shape of the table.

But for me I couldn't get out of my head that night in May when Les, a tall good-looking kid from Louisiana, was killed.

We had been patrolling the jungle several miles south of the valiantly defended Marine base at Khe Sanh, west of Vietnam's ancient capital of Hue, and east of the A Shau Valley, which would later be known for huge brigade-sized battles with the North Vietnamese Army (NVA). Late in the afternoon my company commander decided to split off my platoon to take up a position on a small hill a few hundred meters from the rest of the company. We had been in contact with the NVA nearly every day for several weeks. We were in a hotly disputed area with neither side able to completely claim control.

The jungle was thick and with three canopies of vegetation we could not see the sky. Sometime around midnight we were attacked. We used claymore mines and hand grenades to keep the enemy out of our position for fear that muzzle flashes from our rifles and machine guns would give away individual positions. After several hours a couple of NVA soldiers got so close to the position manned by Les that he fired his machine gun because he was also in the killing zone of his hand grenades. Just as feared his muzzle flash brought a burst of fire from another NVA position and at least one of the rounds hit Les in his stomach.

As trained, the squad leader quickly was able to fill the position now vacated by the severally wounded Les. I went with our medic to see what we could do. As our medic search feverishly for a vein to insert an IV, I held Les's head in my lap. I knew Les was dying and I knew that without an IV he would die even sooner. I leaned close to his ear and whispered, "I'm sorry." He looked at me and said "That's all right, Lieutenant, I'm OK" and a few minutes later he died. He died in my arms, his eyes looking into mine. I was just 21, but I was two years older than Les. Even after over thirty-nine years I cannot forget that look. We were able to bring in air support for additional defense until the next morning when we would go on the offensive.

Thirty-seven years later another young man would die in combat. 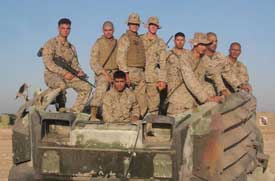 Marine Cpl. Jeffrey Starr, far left, is the author's nephew. Starr was killed on Memorial Day 2005 in a firefight in Al Ramadi during his third tour.

My nephew, Marine Cpl. Jeffrey Starr was killed in Iraq on Memorial Day 2005. Jeffrey was killed in a firefight in Al Ramadi during his third tour. But it was during his second tour that his feelings about being in Iraq crystallized. On April 13, 2004 the Marines of 2nd Squad, 2nd Platoon, Bravo Company, 1st Battalion, 5th Regiment, 1 Maine Expeditionary Force entered Fallujah, Iraq seeking out insurgents.

The "Deadly Deuces," as they were called, were in an Amphibian Assault Vehicle ("track") when it was hit by an enemy rocket. Their track became a wreck. The track commander was sliced through his leg by molten metal. Another member of the squad was killed. The rest of the squad quickly took up a position on the roof of a nearby building having brought their track commander and dead comrade with them.

They were quickly surrounded by scores of the enemy. They were able to hold this position for the next several hours until another Marine unit was able to get to their position and provide reinforcements. Jeffrey was a member of that squad. He was convinced he was going to die that day. In a letter to his father shortly after he wrote that he regretted not telling his girlfriend how much he loved her and what he felt about the war in Iraq. Vowing not to let his feelings go unknown he wrote a letter to her, which he secreted on his personal computer and to be found only in case he died.

Several months after he was killed his computer was returned to his parents and the letter to Jeffrey's girlfriend was found. His words, I believe, reflect the feelings of many service men and women who have served so honorably in this war on terrorism.

If you're reading this it's because I'm dead.

I don't regret going, everybody dies but few get to do it for something as important as freedom. It may seem confusing why we are in Iraq, it's not to me. I'm here helping these people, so that they can live the way we live. Not have to worry about tyrants or vicious dictators. To do what they want with their lives. To me that is why I died. Others have died for my freedom, now this is my mark.

I love you with all my heart. Goodbye my love. Jeff"

There was much more to this letter, but it captures how Jeffrey felt about what he was doing as a U.S. Marine. When I read the letter, I cried anew.

He had been stationed at Camp Pendleton and he, with his Marine friends, would spend many hours at our home. At the time I flattered myself thinking he wanted to visit with his uncle who had been in combat. I now realize that having three teenagers in the house, two of them girls, these young men were just looking for a place to hang out.

Like Jeffrey, I fought in an unpopular war. Like Jeffrey I was a volunteer. To this day I believe in what I was doing, even if on the national level there were mistakes. Like many Vietnam War veterans I wanted to defeat communism so that people would not have to live under the oppressive that comes with that system. Jeffrey thought the same way about the people he wanted to help.

Just before Jeff left for his third tour I asked him what he thought about going back. He responded with the perspicacity few of us had at the age of 21. He said "If we (Americans) don't do this (free Iraq of a vicious dictator), who will? We are the only ones who can."

Sunday I will put my American flag up in front of my house in honor of Jeffrey, Les and the many thousands of military men and women who have died for this country as well as for the military veterans of this great country. I'll salute the flag and remember that Jeffrey and Les gave their lives for all of us and the freedoms we enjoy.

If you attend a Veterans Day parade or other event on Sunday you might notice a middle age veteran stand a little straighter as our nation's flag goes by. Shoulders a little more square, chest a little inflated. Watch as his or her hand comes to a salute. Perhaps more slowly than in years past, but with the same pride as when we wore our uniform.

If you look close enough you may even see tears start to form. As I look at our nation's flag I remember what it means to have served this nation in the military. Duty, honor, country. It is the noblest calling -- the willingness to sacrifice oneself for the freedoms and liberties of others. -Sunday is the day to thank the veteran in your life.