After enduring a threatened closing, San Diego Opera will open its 50th season in January with grand opera and other musical events. I usually identify a theme that is common with the operas, but the 2015 season covers so many subjects that I cannot identify a common one.

The 2015 season officially opened in September with a recital concert featuring Stephen Costello and Ailyn Perez, our favorite young opera stars. The rousing reception from a capacity audience at the Balboa Theatre validated the public’s support of keeping opera in San Diego.

Stephanie Blythe performed in a solo recital this month that added to the preseason warm-up. The popular mezzo-soprano brought superstar quality to SDO by singing twice here last season. Her program focused on popular American ballads made famous by Kate Smith in the mid-20th century.

The grand opera season will open Jan. 24 with the company’s signature opera “La Bohème,” the company’s 11th production in five decades. The tradition began in 1965 as the first opera produced by the fledgling company and repeated every five years.

The Puccini favorite about romantic encounters and sad partings of young lovers begins with the starving artists living in a Paris garret and moves to the gaiety of Christmas Eve at a Latin Quarter bistro.

Casual love affairs dissolve in jealous doubt and end with the melancholy death of Mimi, the frail girlfriend of poet Rodolfo. 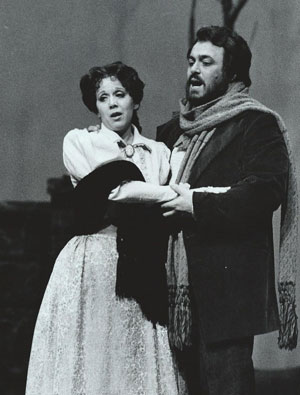 Great ensemble singing of memorable tunes highlights the opera by one of Italy’s greatest composers.

A different kind of romance is discovered in the second production, Mozart’s “Don Giovanni.”

The notorious woman-chaser, Don Juan, makes a career of seducing any woman who catches his eye, but he goes too far when he kills the father of one of his amorous quests. The ghost comes back to offer Giovanni redemption for his sins. Giovanni refuses, providing a fiery finale to the Mozart classic.

Switching from romantic affairs to politics is the San Diego premier of “Nixon in China,” a popular contemporary opera.

American composer John Adams took a historic event and crafted it into an operatic drama that has been performed by companies around the world since its premier at Houston Grand Opera in 1987.

Many myths evolved about Nixon’s relationship with Mao Zedong; the opera attempts to present an accurate account of the historic event.

The scenario also focuses on the personality conflict between Pat Nixon and the domineering wife of Mao, Chiang Ch’ing, a harsh revolutionary in contrast to Pat Nixon’s more compliant nature.

A Henry Kissinger character is also prominent both in real life and as a parody character in a communist satire presented for the American guests.

The last of the 2015 staged productions is a new mariachi opera by José Martinez, composer of the popular mariachi drama in the 2013 season. “El Posado Nunca Se Termina” is performed by the famous Mariachi Vargas de Tecalitán, the oldest traditional Mexican music group.

The story is based on the fear that the 1910 Halley’s Comet foretold disaster. It was the eve of the great Mexican revolution, when peasants became enraged and demanded the return of their land.

The opera is part of Mariachi Week at the Civic Center.

Tickets for all performances of the three grand operas and the mariachi opera at the Civic Theatre and the gala concert are available online at www.sdopera.com or by calling 619-533-7000.

Ford is a past president of San Diego Opera and supports the opera archive at San Diego State University.
User Response
0 UserComments