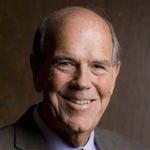 GEORGE CHAMBERLIN has been associated with The Daily Transcript at SDDT.com since 1998 and became Executive Editor in 2006. He is responsible for the development of editorial strategies for the newspaper and website. He has introduced video and audio into the editorial products and is the public face of the company at many community events. George regularly chairs industry roundtables and conducts video interviews of participants for use on the San Diego Source. He writes two daily columns, "Money in the Morning" and a daily stock market wrap-up.

George, a long time resident of North County, lives in Vista with his wife Terry.

From the Executive Editor

Two months ago you couldn't give away stocks. However, thanks to the latest leg of the recent rally -- a gain of 217 points yesterday in the Dow industrials -- the major indexes are at their highest level in eight weeks. The day before, the index was down more than 150 points with a big chunk of the decline tied to a 10 percent fall in Wal-Mart shares. The stock was slightly lower yesterday but it didn't slow down the return to equities we've seen in October.

Stock prices fell yesterday, the first sizeable decline so far in October, dropping 157 points on the Dow industrials. About a third of the decline is directly linked to the 10 percent drop in shares of Wal-Mart, one of the 30 stocks in the Dow industrials. The loss happened after the CEO said earnings in 2016 would be negatively effected by ongoing programs to enhance sales and profits. Some analysts think the recovery could take well more than just one year.

Turns out stocks don't go up -- or down -- forever. After seven consecutive trading sessions to the upside, the Dow industrials declined yesterday by 50 points, or 0.3 percent. The small decline brought out a lot of the permabears who had gone into hiding during the early October rally. To be sure, there probably will be more volatility as we get closer and closer to the next Fed meeting in two weeks. If comments from Fed officials are any guide, it is very unlikely there will be a rate hike this month or before the end of the year.

A headline at MarketWatch.com on Wednesday said, "Retail sales slow toward end of summer." However, a closer look at the retail sales report for September from the Department of Commerce shows nothing could be further from the truth.

The stock market rally extended to seven sessions in a row yesterday with the Dow industrials gaining 47 points on a quiet Columbus Day. So, as investors prepared for the start of trading today there was a sense the streak was finally in jeopardy. Maybe it was wishful thinking by all the permabears out there at MarketWatch.com, owned by the Wall Street Journal, or simply sour grapes because they missed the recent rally. But, a drop of about 80 points in the Dow at the get-go today lasted about half an hour before the index returned to positive territory. One of the wisest expressions on Wall Street is "don't fight the tape." Right now the momentum is upward. True, that could change quickly but it makes little sense to try to anticipate a change in direction.

The October rally continues. Much to the disappointment of the permabears, CBNC, MarketWatch.com and others hoping for a stock market crash, the Dow industrials rang up their sixth consecutive winning session on Friday and posted the biggest weekly gain, 3.6 percent, since December of last year.

Remember yesterday's column where I referenced a MarketWatch.com report saying stocks were due for a "rough" day? Well, add the warning to the long list of failed efforts by the website -- owned by the Wall Street Journal -- to extend the Q3 stock market declines. Turns out, at the end of the day, the Dow industrials were up 139 points, making it five sessions in a row to the upside and, of those five days, four were increases of more than 100 points.

Worst appears over for REITs

Like many other interest rate-sensitive sectors in the stock and bond market, real estate investment trusts went through a tough patch in the third quarter. The persistent fear of a Federal Reserve increase in short-term rates sent share prices tumbling.

The October rally continued yesterday as the markets shrugged off several attempts to take some profits. The Dow industrials opened with a triple-digit gain, went negative as oil prices dropped, and rallied back to close with a gain of 122 points, just a few points away from 17K.

The October rally continues. After three months of constant declines on Wall Street the stock market has resumed its winning way. While the major market indexes paused yesterday -- the Dow industrials were up 14 points and the S&P 500 finished slightly lower -- the buying has returned early today with gusto. The Dow has traded up triple digits and closing in on the 17K mark after falling as low as 15,370 in the third quarter. To be sure, volatility is not going away but it now appears to work in the favor of investors.

On a day when most "experts" were predicting some serious profit taking on Wall Street, the markets roared higher and, combined with the big rally on Friday, erased most of the losses in September. The Dow industrials rose 300 points, extending the big gains on Friday. The S&P 500 stock index was also up more than 1.5 percent, making it five sessions in a row to the upside, the first time that has been accomplished in 2015.

Share buybacks an effective way of putting cash to work

Like many other companies, Qualcomm finds itself in a situation where it is sitting on billions of dollars in cash and the stock price has fallen sharply from its highest levels nearly a year ago.