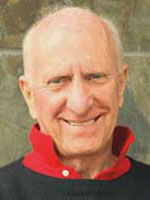 George Mitrovich is president of The City Club of San Diego and The Denver Forum, two leading American public forums.

Of religion, politics and media

Some time back, a writer for a major American newspaper wrote a story about an openly gay United Methodist minister who lost her church over her sexual orientation. The reporter wrote the minister was in danger of being “excommunicated.”

In the early summer of 1971, I received a telephone call from Wes Barthelmes, a key congressional aide. He asked if I would like to join him for lunch with a young Democrat from Delaware, who was planning to run for the U.S. Senate against Caleb Boggs, the state’s senior senator.

Is this any way to run a country?

The British House of Commons dissolved March 30 and the country entered five weeks of campaigning to determine a new government.

“In the Matter of Kevin Faulconer,” my column that ran last month in the Daily Transcript, appears to have displeased some people who admire the mayor.

In the matter of Kevin Faulconer

The need for civics education and voter registration

This is the 40th year of The City Club of San Diego. Despite the fact we’ve presented 1,193 programs in the public interest and despite The City Club’s standing as one of the America’s top public forums — No. 3 by one rating organization — The City Club remains largely unknown in our town.

Confessions of a binge watcher

How many times have you heard speakers say, “I’m not an expert, but…” Then they proceed to discuss the subject they have already admitted they’re unqualified to talk about. Just say what you are going to say. It will stand on its merits — or not.

When the head of a union representing police officers in New York City, is at odds with the city's mayor, not over contract negotiations, but an accusation of not supporting the men and women in blue, choosing street protesters over police and being complicitous in the killing of two officers in Brooklyn, that’s intolerable.

The most interesting man I ever met

Radical reform for a democracy in distress

I believe in government, which is established through the means of politics.

The drug epidemic sweeping our country is someone else’s problem until it becomes your problem, as it has become my family’s problem.

Wait for verdict on what Roger Goodell may have known