Some 2,700 years before the arrival of the first Europeans in 1769, the Kumeyaay were the first residents of the area now known as Rancho Bernardo, according to the Rancho Bernardo Historical Society.

As recently as 30 years ago, only about a half-million square feet of office inventory existed in what is now called the Rancho Bernardo Marketplace (to include Sabre Springs and Carmel Mountain Ranch) and it was considered a “small-tenant marketplace,” according to Gary Williams, senior vice president of Colliers International and a veteran of the local commercial real estate market.

Now, there's almost 5.5 million square feet of office inventory in Rancho Bernardo and its roster of tenants -- among which are Hewlett-Packard, Nokia, Northrup Grumman, Sony (the first integrated television factory opened in the United States by a Japanese company), Soitec and Teradata Corporation -- are worldwide leaders in their respective industries. Defense and technology are industries that have a particularly strong presence in Rancho Bernardo.

Driving from the community of Rancho Bernardo to Poway, one would hardly know they had entered a new town were it not for the “Welcome to Poway” signs that mark the city’s boundaries. 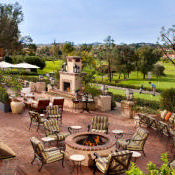 “Rancho Bernardo is a great place to raise children. You have the Poway school system, one of the best in the state. That's what drove me here (in 1986). A Realtor showed us property. I saw a beautiful part of San Diego County and this is where I wanted to be. I'm living on sacred ground. I'm a New York guy, but I never felt at home until I landed in Rancho Bernardo.” -- Sam Bass, San Diego radio/TV personality, and a resident of Rancho Bernardo since 1986.