Penasquitos, or “PQ” as it’s often referred to, translates to “little cliffs” in Spanish and is named for the first Mexican land grant awarded in the region, the Rancho Santa Maria de los Penasquitos, in 1823, to Captain Francisco Maria Ruiz. He built an adobe house that is the oldest known residence in San Diego.

In the mid-19th century, the U.S. Army used the area as a route to transport supplies from the Port of San Diego to Yuma, Ariz. It also served as a way station on the wagon route to Warner’s Ranch from San Diego.

The master-planned community has 52,000 residents and is almost fully developed. Approximately half the area is designated for residential use, a third for open space and about 2 percent for commercial use.

Demand for homes is strong, driven by the high rating that some of its eight elementary schools, two middle schools and two high schools, all part of the Poway Unified School District, receive. 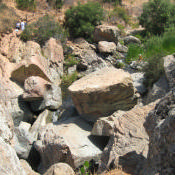 With reputable schools that drive demand for housing, expansive parkland and open space, trails, streams and waterfalls, a landscape of rolling hills and mesas, easy access to Interstate 15 and state Route 56, a skate park and a sports recreational center, Rancho Penasquitos offers a little bit of everything for residents.