Julian is both a small town with a tightly knit community and a tourist attraction that most San Diegans know well. As an official California Historical Landmark, the Julian Historic District architectural review board helps the community keep its historical charm, appearing much as it did when Julian was settled by cousins Drury Batley and Michael Julian in the late-1860s amid San Diego County’s short-lived gold rush.

"It was the only gold rush in Southern California,” explained Krisie Morgan, executive assistant and office manager for the Julian Chamber of Commerce. “We’ve kept Julian as close to the 1800s as possible."

While gold mining here lost its luster long ago, its legacy has been the crops that grow best in Julian’s soil: apples.

Julian is a popular destination for tourists in search of orchards for apple picking, fruit stands and apple pie shops, including Main Street’s Apple Alley Bakery, Julian Pie Company and Mom’s Pies. Apples draw the biggest crowds from September to December, according to Morgan, but snow in and around Julian attracts visitors throughout the winter months. 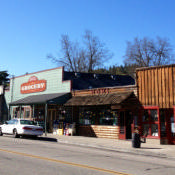 About an hour east of downtown San Diego is a historic gold mining landmark with small-town charm and the unmistakable aroma of apple pie.