Originally home to the nomadic Kumeyaay Indians for thousands of years, Mission Valley was the site of the first Spanish settlements in California, when Father Junipero Serra arrived in 1769 to establish the first of 21 missions in the region, the Mission Basilica San Diego de Alcala.

In the same year, the first Spanish military outpost, the Presidio of San Diego, was also built by Gaspar de Portola.

On either side of I-8, long rows of juxtaposed hotels form Hotel Circle North and South, featuring an assortment of accommodations for every kind of traveler, from budget motels to brand-name hotels. With the freeways cutting across Mission Valley and offering quick access to the beaches, SeaWorld, downtown San Diego and other area attractions, it’s a central location for tourists and business visitors. 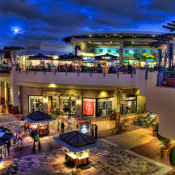 Home to the first Spanish settlements in the area, Mission Valley today is a mecca for shopping with three big malls, a visitor’s hub with Hotel Circle which offers a variety of accommodations and easy access to freeways and attractions, and Qualcomm Stadium, home of the Chargers and San Diego State University’s Aztecs.