The build-to-lease project will be a six-story, 248,882-square-foot building with office space, interview rooms and a regional forensics lab. The 11.2-acre campus will also have a 30,000-square-foot garage for 480 vehicles.

From the outside the facility will have glass windows throughout most of the outside, terraces and an open area in the front of the building.

HGA Architects and Engineers, Clark Construction Group and Weidlinger Associates Inc. make up the design and construction team on this project.

The $100 million FBI building is being built to consolidate the six county FBI offices and it’s agents into one facility, since the FBI says it needs to support new functions and meet the enhanced IT infrastructure requirements.

“This building means a lot to us because now we will have a campus that will allow us to manage our staff more efficiently to better serve this county,” said Keith Slotter, FBI special agent in charge of the San Diego region, to the approximately 100 people that attended at the groundbreaking ceremony. 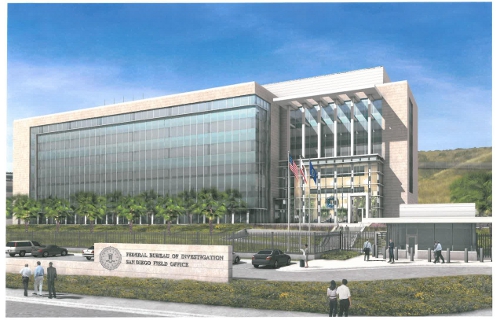 A rendering of the new FBI building in Sorrento Mesa, which recently broke ground. The project is scheduled for completion in 2013.

Slotter added that the facility will have “ideal security requirements” that follow FBI protocol.

The new facility will be built with energy efficient amenities and sustainable features. GSA anticipates the building will meet LEED Gold standards from the U.S. Green Building Council.

“The GSA has been challenged by President Barack Obama to create projects that are designed to ensure excellence in public architecture, engineering and construction,” said Ruth Cox, regional administrator for GSA’s Pacific Rim Region.

Construction is slated to be completed by the second quarter 2013.

The Las Vegas-based Molasky Group, which is acting as the developer of the project, expects approximately 700 construction related jobs will be created during the lifespan of this project.

The $223.4 million build-to-lease agreement spans 20 years, where the project is being built to meet FBI and GSA designs and standards.