Three hotels totaling 650 rooms at The Corky McMillin Cos. Liberty Station development were unanimously approved by the California Coastal Commission last week — with a few changes.

Plans call for a 252-room, all-suites hotel; a 215-room, residence-style hotel with kitchenettes; and a 183-room hotel with a mix of standard rooms and suites in the 2200 block of Lee Court, across the boat channel from the rest of Liberty Station.

The Coastal Commission has an established policy of levying fees on the highest-price lodging to subsidize the more affordable lodging.

The thorniest issue for McMillin had been the proposed payment of a $1.89 million in-lieu fee for the inexpensive lodging. It isn't clear whether the money would be used for hostels, budget motels or a campground.

Instead of the fee, McMillin offered to set aside up to 25 percent of the all-suites hotel rooms for families with as many as six people. This, says Elliott, would soften the blow of the higher rates. 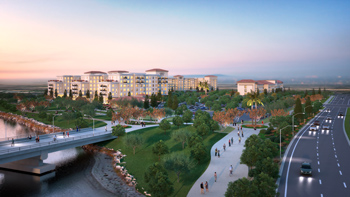 "We believe our proposal sets a positive precedent for quality low- and moderate-cost for families who might not choose a youth hostel or a campground," Elliott wrote."It is also worth noting that we are not displacing any lower cost overnight accommodations or proposing any condo-hotel component to the project."

Elliott added that since McMillin had come up with an alternative to the fee, the fee shouldn't have been legal.

As a compromise, the Board of Coastal Commissioners agreed to cut the fee in half, to about $900,000.

The in-lieu fee on the hotel wasn't the only requirement McMillin was originally supposed to satisfy under the Coastal Commission staff recommendations.

McMillin said that while an airport shuttle is part of its own proposal, expanding the service to other parts of the city would be economically and logistically unfeasible.

In a compromise, McMillin will provide shuttle service to the airport, Santa Fe Depot and Old Town Transit Center.

Building a public recreation dock to serve the boat channel bisecting the property has also been proposed, but that won't happen until the channel is transferred from the U.S. Navy to the city of San Diego (the underlying landowner for most of Liberty Station).

The project, which had originally been conceived as a single, 650-room Nickelodeon Hotel before that plan fell apart during the recession, also calls for a 3,180-square-foot restaurant to be shared by the hotels, a pedestrian/bike path along the boat channel, a sand court area for volleyball and a 150-foot-wide esplanade, intended to be a major feature between Liberty Station and Spanish Landing.

The public esplanade is supposed to be before the first hotel is occupied. Also, 701 parking spaces will serve the hotels.

The hotels are a design of Joseph Wong & Associates. The project could begin in late 2014 or early 2015 with completion about two years later.