Talk to Jeff Blair, principal and co-founder of BSD Builders Inc., and he will tell you that relationships have led to his company's success.

Blair and friends Steve Sherrer and Jim Docherty started BSD three years ago, naming the company after each of the founders' last names. Because of relationships, the company has grown from a three-man operation to a staff of just under 40.

"We are relationship-driven," Blair said. "Because of relationships we have been able to build a great staff and work on some great projects."

Since its inception in November 2005, BSD has grown dramatically, Blair said, at least doubling its revenue every year.

Even in a slowing construction market, Blair estimates the company will generate close to $30 million this year, up from $16 million in 2007. 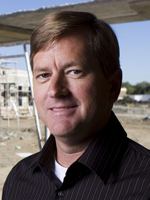 Blair's role in the company focuses more on the businesses side of things, where he handles the banking and bonding aspects. He makes sure the money "goes to the right spot," according to Blair.

He has more than 20 years of experience in construction, which started at his family's plumbing and mechanical company and continued at various general contractors around town.

"About 80 percent of the projects I have worked on have been in health care," Blair explained.

All three owners worked on medical facilities before joining forces at other contracting companies, so it seemed like a natural fit to concentrate on these types of projects.

"The medical field just doesn't let anybody in to work at one of their hospitals," Blair said. "You have to have experience."

Blair said the company thrives on hospital and in particular operating room jobs, where infection control with patients and staff is at the utmost importance, because the work is demanding and rewarding at the same time.

"We love to solve problems and take on challenging projects," he said. "These types of projects are gratifying."

The most difficult part of these projects is timing, and communication at the beginning of the process is key, Blair said.

"In health care, time is so important because it has such a huge financial impact, so it's important to get the projects turned around as quickly as possible," he said. "We are constantly preaching to our staff to be cautious of your surroundings because of the environment. Our goal is to be as unnoticed as possible ... so (preconstruction) is also paramount."

The company's largest project to date, and the one most prominent, according to Blair, is the $22 million Inland Valley Medical Center project currently under way. When completed, it will add 45,000 square feet of combined renovation and ground-up expansion of existing ICU, ER and radiology rooms.

What makes BSD stand out from the competition is its staff, according to Blair.

"We have a huge talent pool," he said. "We have folks that have been on the other side of fence and have represented the owner's side of the construction realm and specifically heath care ... so to be able to take that knowledge of what the owners are really expecting and combine that with our construction expertise is huge."

Because Blair and his partners feel that employees are their greatest assets, they have recently hired two new employees -- even in a down construction market.

"We just felt that they were too talented for us to pass up," Blair said.

Speaking of the current economy, Blair said BSD has not been affected much this year, but has noticed the landscape changing as more of the larger contractors focus on work they would normally stay away from.

"The big boys are now looking at mid-sized markets, so there is going to be a lot more competition," he forecasted. "On job walks there are a lot more subcontractors and general contractors ... and I expect that to continue for a while."

As for the future of the company, Blair believes the health care field will lead BSD forward -- not only because aging hospitals will need new facilities and medical buildings will need to be retrofitted due to California seismic regulations, but because the pace of technology requires constant upgrading and remodeling.

"The new technology in the health care arena is incredible," he said. "By the time we install some of the new technology, it's obsolete. It probably outdates itself faster than computers."

"The folks out there developing this technology (are amazing). I hope they keep going strong because I think that will drive the business as well."