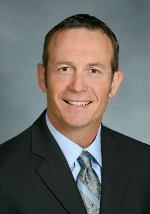 During his last two years as an undergraduate at the University of San Diego, Tim Penick worked about 20 hours per week at T.B. Penick & Sons, the construction firm his great-grandfather founded in 1905. He started with the company full time after graduation and, since 1999, has served as its president.

But Penick's future in the family business wasn't always set in concrete.

“I thought about going into law. I was interested in maybe having a sports career, but that ended pretty early. I think those were the two things that I was considering,” said Penick, who played baseball and football and was a water-skier in high school and college. “I had lots of other ambitions, but once I got started here, I just kind of fell in love with it. I just loved building stuff.”

Indeed, “building stuff” is exactly what Penick and his company have been doing -- in all 50 states and on three continents. Locally, the work of T.B. Penick & Sons is perhaps most evident at San Diego landmarks such as Balboa Park, SeaWorld, and the San Diego Convention Center.

“I like working as a part of a team, where what you did impacts, and benefits and affects the team around you, as opposed to a job where you don't have that kind of fulfilling teamwork,” said Penick, who added that he loves the permanence of what his company has done.

Penick said his company is involved with many projects for the military and on behalf of the San Diego Unified School District. T.B. Penick & Sons provided all the site concrete for the recent renovation of Terminal 2 at Lindbergh Field and is completing the terrazzo there, he said.

Many lists rank T.B. Penick & Sons as the oldest and largest locally headquartered general contractor, as well as the largest concrete contractor in San Diego. According to Penick, it's also largest architectural concrete company in the country.

"So, I think in those ways, that brings influence, by being a market leader,” he said.

Leadership is also a priority for Penick and his company in the community and beyond.

The church, international relief teams, world vision and the organizations for the poor, such as Father Joe’s Villages, are recipients of the company’s support.

The company is also supports various organizations that work to fight diseases that affect its employees or clients, such as cancer and diabetes.

Many things have changed -- especially technologically and in market segments -- in the 108 years since Thomas Beverly Penick cemented his place in San Diego history by using horses to haul sand and gravel to construction sites. T.B. Penick & Sons has adapted extremely well, but Tim Penick says the company's essence remains unchanged.

“You know, we've responded to those (changes) and changed our expertise and the types of things we've done quite a bit over those years,” he said, “but essentially, getting down to it ... we build stuff for people.”