SD accelerator to move SPAWAR technology from lab to market

If you’ve been on the hunt for a promising technology to capitalize on, or want to launch your own startup company — and really, who in San Diego hasn’t? — you’re in luck.

In response to a 2011 Presidential Memorandum instructing the Department of Defense to come up with savvier technology transfer, SPAWAR Systems Center Pacific has teamed up with Arizona State University.

The result is the San Diego Furnace Technology Accelerator site, and about 70 of SPAWAR’s licensable patented technologies are up for grabs.

ASU was awarded a $1 million Defense Department grant in January 2014 to help the department’s research and development labs transition their many technologies into the commercial sphere. The Furnace method, established in Arizona in 2012, gives regional entrepreneurs greater access to intellectual property.

“The goal was to apply the same open innovation philosophy and methods that ASU has been operating on locally to DoD intellectual property and establish three cohorts of startup companies based on those technologies,” said Mitzi Montoya, vice president and university dean of entrepreneurship and innovation at ASU.

“SPAWAR is a giant in terms of cutting-edge research, development and implementation,” she said. “It has been the launch pad for numerous disruptive innovations. A partnership with SPAWAR, which is already a major contributor to the growing city of San Diego and its innovation economy, is exactly the kind of strategic, collaborative initiative that ASU’s Furnace hopes to initiate and implement to have a lasting impact on regional growth.”

In addition to SPAWAR and San Diego, ASU established Furnace programs in two other regions with corresponding Defense Department labs. 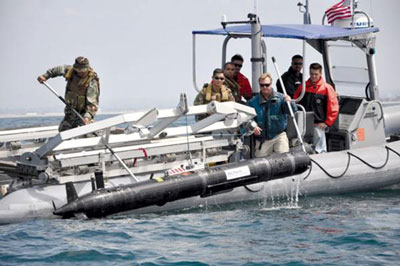 A representation of SPAWAR's Unmanned Vehicle Launch and Recovery System, one of about 70 technologies available for licensing through the accelertor.

A New England program that collaborates with the Army Soldier Systems Center lab is in the application phase alongside San Diego.

Interested individuals or teams can scope out the SPAWAR technologies online or attend one of four information sessions held locally.

The SPAWAR technologies range from a concept for the water-based launch of an unmanned aerial vehicle to secure data transmission over a network, an artificial neuromuscular unit, a communication assets survey and mapping tool, to a hydrogen gas generator using temperature controlled hydrolysis.

Then interested teams attend a co-founders weekend April 11 -12, where they spend a day and a half developing a functional business plan that they pitch to a panel of judges.

The winners from this — and from a similar online option for out-of-towners due April 15 — enter a six-month accelerator and work out a licensing agreement with SPAWAR. Because the goal of the program is to get the concepts from lab to market, SPAWAR doesn’t intend to play hardball with these agreements.

“In the early part of the process, they’ve got a business plan, and now come to the Navy lab here and work out a license agreement,” said Brian Suh, director of the Technology Transfer Office at SPAWAR Systems Center Pacific.

In the ensuing six-month program, which begins April 28, Wasabi Ventures and local players like EvoNexus will assist the teams through what Suh calls a “rigorous training program” to deal with company formation, minimal viable product development and pitches.

"Our intention is not to reinvent the wheel," said Jeff Abbott, director of acceleration services at ASU and project manager for the furnace technology transfer accelorator. "ASU is not coming to San Diego to plant a flag and recreate another program--we are a consultant and our job is to produce connectivity, activate and catalyze the existing excosystem."

In addition to EvoNexus, which is a promotional partner, Co-Merge is providing work space to the winning teams free of charge, as is DeskHub, a new co-working space set to open in Little Italy in May. Abbott said the real prize is the coaching from Wasabi Ventures, along with the firms connections and, of course, the possibilty of funding. 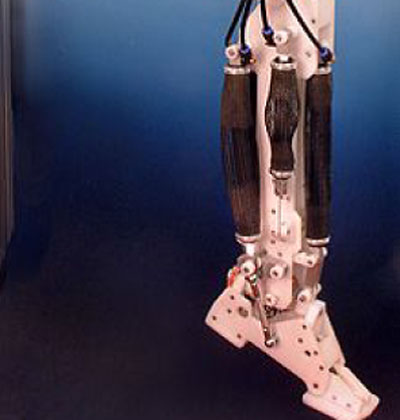 The concept behind SPAWAR's networked structure of artificial neuromuscular, which could be used to create artificial muscles.

By the end of the program the teams are really companies ready to pitch to VCs and get the SPAWAR technology to the marketplace.

Suh said the goal is to get from five to 10 new startups out of the process, and Abbott pegged it a bit higher at six to 15. Though these startups wouldn’t be the first — Suh said he can think of at least four in San Diego and one in Sunnyvale that stemmed from SPAWAR technology, including Peregrine Semiconductor (Nasdaq: PSMI) and Lumedyne — it’s clear that the lab, in its 75th year, can generate more.

“What we’re trying to do is create value from the patents and technology developed within the Department of Defense labs,” he said.

“The leadership here and the inventors and the Technology Transfer Office here are very supportive of technology transfer and want to see a return on investment for the federally funded research going on in the lab.”

More information on the information sessions, co-founders event and available technologies are at www.furnaceaccelerator.com. All of the listed patents are also available for licensing outside of this program.