The 784-foot ship will be configured with a 52,000-square-foot flight deck, fuel and equipment storage, repair spaces, magazines, mission planning spaces and accommodations for up to 250 personnel. The ship will be capable of supporting multiple missions including air mine counter measures (AMCM), counter-piracy operations, maritime security operations, humanitarian aid and disaster relief missions and U.S. Marine Corps crisis response. It will also support MH-53 and MH-60 helicopters, and will be upgraded to support MV-22 tilt rotor aircraft.

In 2011, General Dynamics NASSCO was awarded a contract from the Navy to design and build two Mobile Landing Platforms (MLP), the USNS Montford Point (ESD 1) and USNS John Glenn (ESD 2). MLP was recently reclassified by the Navy as Expeditionary Transfer Docks (ESD). In 2012, a third MLP, the USNS Lewis B. Puller (ESB 1), was added to the contract and reconfigured as an ESB, or formerly known as a MLP Afloat Forward Staging Base (AFSB). All three ships have been delivered by NASSCO to the U.S. Navy. 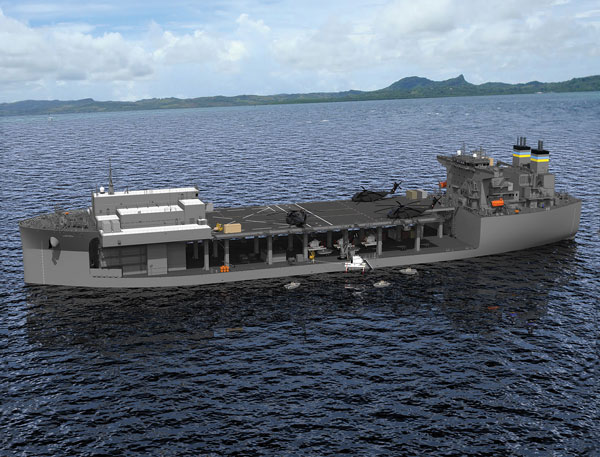