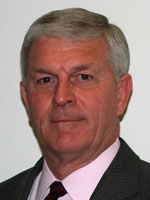 The announcement comes after a nation-wide search to replace Blumberg, its founding executive director of 10 years.

"We knew it was going to be very difficult to find someone to replace Larry. He has been a strong and long-standing leader in our defense and military communities — everyone knows him," said Jamie Moraga, immediate past president of the organization and chair of the committee charged with finding Blumberg's replacement. "Randy is more than qualified and well-positioned to begin where Larry will leave his legacy — and continue to grow SDMAC."

The transition period will begin immediately, with Bogle expected to fully take the reins in mid-December.

SDMAC was founded in 2004 to facilitate and advance the partnership between the military, elected officials, civic leaders, and the business community in order to enhance the understanding of the military's many contributions to the San Diego region. Annually, SDMAC commissions an economic impact study showing the considerable benefits from defense-related spending and presence of the military in San Diego. In 2015, San Diego benefitted from more than $24.8 billion in direct defense spending and was supported by more than 328,000 jobs by the military sector.