When it comes to people, Stephens wants to ensure his company is recruiting and retaining the best and the brightest in the field, also noting that the firm's acceptance rate for recruiting talent is 90 percent.

"We're pretty selective on the people we invite to come to Ernst & Young, and we're blessed that we're able to get such a large number," Stephens said, adding that the range of services provided at the firm Young can be a great resume builder for those looking to advance their careers.

When it comes to success in the marketplace, however, Stephens brings to the table more than 30 years of experience in accounting and advisory services. One of Stephens' areas of expertise is helping companies go public and to raise venture capital -- a role that has become somewhat more challenging, considering the scarcity of initial public offerings in the marketplace. 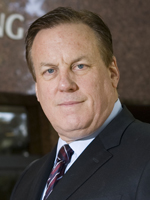 "The venture capitalists right now, a lot of them are really focused on trying to harvest or salvage some of the values on some of their companies that are moving along pretty well, so they've probably got their eye more on that than trying to find the next great thing," Stephens said. "Having said that -- if there's one that has the right kind of promise, (venture capital) is still available for companies, but it sure isn't top of mind right now."

Stephens continued, "Just because there aren't initial public offerings happening right now doesn't mean that you should take your eye off the ball with respect to the importance of venture capital, with respect to the vibrancy of our economy in the future."

Prior to relocating to San Diego, Stephens spent 24 years working at Ernst & Young's Phoenix office, where he worked with startup companies in the biotech industry. However, Stephens said the difference between Phoenix and San Diego when it comes to the growth and development in biotech and life sciences, is like "night and day."

"They're both great communities and they both have a lot of pride and the ability to get things done," Stephens said. "I just think San Diego was particularly foresighted when it made the commitment a couple of decades ago to the biotech and technology space, and what I saw that amazed me is serial entrepreneurs.

"In Arizona, we felt lucky if there was someone who had done a venture-funded company that actually took it public successfully and was trying a second one. As I was meeting people here in San Diego, they were saying things like, 'I'm on my fourth one. I'm now working with my seventh one.' So what you have here is a community that is really working together and focused on creating those new companies. It's like a big incubator."

While in the Phoenix office, Stephens also ran the company's Entrepreneur of the Year awards program for the region. The program honors the success and vision of local entrepreneurs. Since relocating to San Diego, he has continued to be a part of the local program, which, he has observed, is even bigger and more visible, having consistently sold out banquets with more than 1,000 attendees.

Ernst & Young is still accepting nominations for this year's awards, and the deadline for submissions is March 16.

While Stephens emphasizes the importance of ensuring and recognizing success, the current economy still presents obstacles for many of the businesses with which he works.

With experience in management and consulting, Stephens has worked through economic downturns in the past and said the current recession is among the worst. But even with its obstacles, it presents opportunities for improvement.

"I think one of the advantages of having been through some of these in the past is also being able to share with people: This too shall pass," Stephens said. "The more we can just get out and talk to people and share views, I think it'll help us find the best ways to weather the storms.

The economic downturn, he said, will compel companies to take a hard look at the way they conduct business. It may also help to create more streamlined businesses.

"The adverse effect of the economy is going to create a little bit of a benefit in that it's going to force companies to look very hard at everything they do, and you will see some very good and healthy process changes out of that that will hopefully make some companies stronger after they weather the storm and are ready for the recovery."

In spite of some of the challenges ahead, Stephens is optimistic about the future of business in San Diego, particularly due to the city's community-minded approach.

"I'm impressed by the amount of pride that this community has," Stephens said. "It's very much that old adage of 'a rising tide floats all boats.' You see a lot of interest in people helping others to the extent possible, because it's good for the community, good for the marketplace. And this city has no interest in giving up its recognized leadership, particularly in the biotech area."