By JENNIFER McENTEE, Special to The Daily Transcript
Monday, December 31, 2012

Jim Horton is just getting started as the new senior vice president of the San Diego market for Spokane, Wash.-based AmericanWest Bank. The third-quarter acquisition of Security Business Bank — where Horton was chief banking officer — expanded AmericanWest Bank’s regional footprint to seven branches between downtown San Diego and Carlsbad, and one in Palm Desert, Calif.

The transition from small community bank to a growing organization that has $2.7 billion in assets and 80 branches in four states means new challenges, resources and opportunities, Horton said.

“We have more branches in key markets, and more people to manage,” he said. AmericanWest continues to make mergers and acquisitions of banks with similar cultures and customer bases, according to Horton. 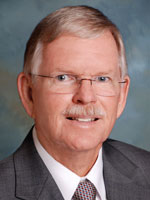 AmericanWest bills itself as a business-focused community bank. Its offerings include commercial and small-business banking, mortgage lending, treasury management products, and consumer products and services.

“We pretty much do business with the spectrum [of businesses], the way that most community banks do,” Horton said. “With the transition, there has been plenty to do. We’re actively working toward increasing our business in San Diego.”

Horton is seeing anecdotal evidence that the local economy is getting back on track.

“I think that San Diego is very sensitive to real estate, and that affects the various levels of business,” he said. “We’re starting to see that real estate is picking up, from the large homebuilders to the folks that are buying real estate.”

While AmericanWest may be a new entity for Horton, he’s not new to the San Diego banking community. During his 40-plus years in the local market, Horton has worked in commercial and business lending, branch operations, credit administration, special assets and auditing.

His civic involvement has included past leadership of both the Farmers Insurance Open and The Century Club of San Diego. His goals for 2013 include volunteering more of his time to San Diego causes, he said.

He also plans this next year to grow AmericanWest’s name recognition in town, though recent advertising campaigns have had some success.

“Going forward, I positively hope to push and grow the brand,” Horton said, noting he hopes the business community recognizes AmericanWest’s value and customer service. “We’re a strong, well-capitalized bank with a lot of positive opportunity. If we could get people saying, ‘Hey, we need to talk to Horton,’ that would be great.”