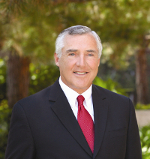 “We’re larger than the small guys, with a higher level of service,” he explained in a recent interview. “Our customers, they are for the most part closely held operating companies, entrepreneurs with more complex financial demands. They are used to dealing with other entrepreneurs.

“An example would be a company that wants to buy the building they operate from, or want a line of credit. We can provide them with those capabilities.”

Cady was a founding officer of Torrey Pines Bank, which celebrated its 10-year anniversary earlier this year. Torrey Pines Bank is an affiliate of publicly held Western Alliance Bancorporation.

The local bank has more than $2 billion in assets and 11 full-service offices.

“Our plan is to grow in a consistent pattern as in the past,” Cady said. “This market segment is underserved. There is a greater demand for what we do, so we’re going to take advantage of this opportunity.”

Cady said he has seen a dramatic consolidation of banks over the past three to five years as a result of bank failures and regulatory scrutiny. He said this turmoil puts Torrey Pines Bank in the position to be a stabilizing force in the marketplace.

Cady, the father of six grown sons, is a longtime San Diego resident who is active in the San Diego Regional Chamber of Commerce, the San Diego Symphony, the American Heart Association, the Sharp Memorial Hospital board of trustees and the Scripps Ranch Old Pros, a sports-focused, civic service group.

Cady said he’s proud to be an active member of the local community, and proud of the bank that he and his colleagues have built.

“To have a vision of where we started 10 years ago, the success we’ve had is beyond any expectations,” he said.