By Ray Huard, Special to The Daily Transcript
Monday, December 30, 2013 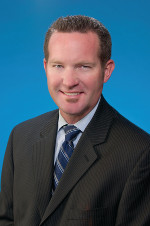 As a boy, Stephen O’Connell wanted to be a firefighter or an FBI agent.

“I couldn’t do either of those. I’m afraid of fire and I don’t like guns,” O’Connell said.

Since October 2102, O’Connell, 42, has been CEO of North Island Credit Union.

His job may not be as glamorous as fighting fires or chasing down bad guys, but it can be every bit as challenging as he oversees a financial institution with about $1.1 billion in assets, 10 branches and about 290 employees.

A graduate of California State University Northridge with a bachelor of science degree in business administration and accounting, O’Connell was chief operating officer of the California Credit Union in Glendale before coming to North Island Credit Union.

In college, O’Connell imagined becoming a partner in a large accounting firm, but later decided that wasn’t the career he wanted.

That family touch ties in with O’Connell’s emphasis at North Island.

“Our main goal is improving the life of our members,” O’Connell said. “We want to understand what our members need.”

With that in mind, O’Connell said, the credit union strives to help its members recover from the financial crisis of recent years.

“People went through the crisis and some have dings on their credit,” O’Connell said. “What we’re trying to do now is to get out there and help them either purchase homes or refinance their homes.”

“We were very flat in lending to our members,” O’Connell said, but that’s changed now that the economy is recovering.

“This is a long, lagging recovery but it is recovering,” O’Connell said. “We believe there’s a big pent-up demand from our members.”

Among other things, the credit union is offering members home equity lines of credit up to 100 percent of the value of their homes. The loans are insured.

“A lot of people don’t have the equity in their homes that they used to, but they still have to do home improvements,” O’Connell said.

In addition to stepping up lending, O’Connell said, North Island is making a push to upgrade its technology to make more of its services accessible by cell phone and tablets to appeal to younger members.

“That’s going to be a big push for us,” O’Connell said. “You see young people on their cellphones all the time.”

O’Connell is a big fan of San Diego. His wife, Stefanie, is a University of San Diego graduate.

“I not only spent a lot of time down here when we were dating, we were married at USD,” O’Connell said.

O’Connell coaches soccer and volleyball, plays golf with a handicap of 16 and runs four miles three or four times a week but he said he doesn’t follow professional sports teams “mostly because I don’t have time.”