By TIERNEY PLUMB, The Daily Transcript
Tuesday, May 22, 2012

Cutting $1 trillion out of the defense budget over the next 10 years would cause San Diego to lose between 20,000 and 30,000 jobs, according to Duncan Hunter, former member of Congress and former chair of the House Armed Services Committee.

Hunter and other fired-up military supporters took to an American flag-lined stage Tuesday, with the USS Midway Museum serving as an appropriate backdrop, to launch a new Super PAC and national association called Fight4America.

The campaign warns America about the severity of the defense cuts. Educational outreach will come in the form of TV commercials, op-ed pieces in newspapers across the country and speeches like the one on Tuesday to create enough momentum to stop the cuts from happening.

“There are adversaries in this world who would like to do us ill,” said speaker retired Adm. Ed Martin, a Vietnam veteran and longtime friend of Hunter's.“They will challenge us if they feel we cannot properly respond.”

San Diego especially will be impacted. A large amount of the Marine Corps installations in the country are in San Diego County, according to Hunter, and its shipbuilding and repairing industry will likely take massive hits if the cuts go through.

President Barack Obama's defense budget proposal for fiscal 2013, starting Oct. 1, calls for defense spending over the next 10 years that is $487 billion lower than previously planned.

The sequestration provision of the Budget Control Act of 2011 requires up to $600 billion of additional cuts starting Jan. 1, 2013, because Congress failed to agree on a $1.2 trillion reduction in the federal budget deficit. 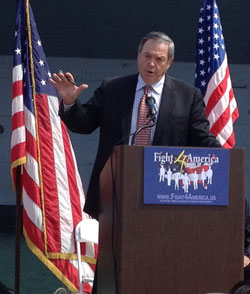 “We do not believe that future budgets will include the full $600 billion of additional cuts, but defense spending could nonetheless be lower than in the president's budget request,” according to a Standard & Poor’s global credit report released April 30.

Congress is not expected to address the fiscal 2013 budget or sequestration until after the federal elections, added the report.

“We are doing [this campaign] because national security will be endangered by the biggest defense cuts in the history of this country,” Hunter said.

The commercials will air in key battleground states leading up to the November election.

“You’ve got to contact your congressman and your senators and demand we maintain strength,” Martin said. “This is the greatest nation on the face of the Earth. We won’t be if we diminish our defense.”

The group is unique in that it’s a Super PAC and a membership organization, meaning it will keep rolling after the election -- and regardless of who is president -- to act as a watchdog for military interests.

The campaign's message is similar to that of the Reagan administration: to achieve peace through strength.

"We never had to fight the Soviet Empire because we were too strong for them," Hunter said.

Now, he said, China is "surging militarily" and quickly growing its arsenal of submarines and ballistic missiles.

"We are not going to become a second-class military and lose control of the Western Pacific," he said.