Specifically, Congressman Bob Filner made clear he had no intention of apologizing for his accusation that Councilman Carl DeMaio’s partner Johnathan Hale had potential criminal responsibility for the damage because his publication, San Diego Gay & Lesbian News, publicized the watergun fight that precipitated the crime.

Instead Filner alleged that DeMaio has previously said that Hale would have a role in his mayoral administration, and therefore questions of Hale’s character and culpability for the event are fair game. Filner declined to provide examples of statements to that effect, telling a reporter who asked to “read the press.”

The Daily Transcript has thus far been unable to locate any attributable quote from DeMaio or Hale claiming that Hale would have a role in DeMaio's mayoral administration.

As he did at a press conference reacting to Filner’s statement Monday, DeMaio said Filner’s unfounded accusations demonstrated that he was unfit to be mayor and was engaging in divisive, Washington, D.C.-style politics.

“We need a mayor with clear and solid judgment,” he said. “I don’t believe our mayor should take incidents like Balboa Park, and use them to attack and try to ruin innocent people’s lives. It’s shameful, and it may be the way you work in Congress, but it has no place in San Diego, and it should be repudiated.” 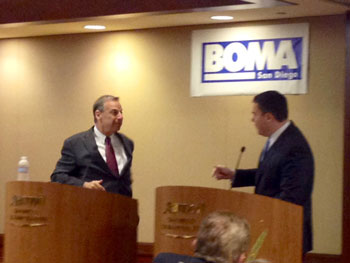 In between the he-said, he-said exchanges, the candidates occasionally voiced their opinions on changes to building permitting functions, pension reform, project labor agreements, expansion of the Convention Center, sustainable energy and homelessness in a debate sponsored by the local Building Owners and Managers Association (BOMA) and moderated by Daily Transcript Editor Joe Guerin.

Organizers — not including Hale, but including DeMaio donor and former SDGLN employee Ken St. Pierre — planned a watergun fight in Balboa Park Saturday night that ended up bringing more than 1,000 people to the park’s lily pond and reportedly resulted in more than $10,000 in damages.

Like other city media outlets that run a calendar of events, Hale’s SDGLN promoted the watergun fight. Neither Hale nor the publication had any role organizing it, according to a screen shot of a Facebook listing for the event provided by the DeMaio campaign.

During the debate, when DeMaio called Filner a liar for his accusations against Hale, Filner pressed DeMaio to answer whether SDGLN had publicized the event. In a lengthy back and forth, Filner repeatedly asked DeMaio to answer his question, and DeMaio repeatedly responded that Filner had no shame.

"It was an illegal gathering, and there was felony vandalism," Filner said. "If you think that your partner, who is on the record responsible for what happened ... because you said he will play a role in your administration, so his character and his judgment, and if there is criminal culpability, is an election issue."

In addition to The Daily Transcript being unable to locate any on-the-record indications that Hale is set to have a role in DeMaio's administration, the Filner campaign was also unable to substantiate its candidate's accusations.

During moments when Filner wasn’t leveling accusations at Hale and DeMaio wasn’t calling Filner a liar, the mayoral candidates addressed questions prepared by BOMA’s executive board. Here’s a summary of those exchanges.

Filner rejected the premise of a question that asked how much the candidates intended to use non-renewable fuel sources to supplement sustainable fuel, since the latter couldn’t be counted on at all times.

He said the city could rely on renewable energy — though he acknowledged he’d have to supplement with traditional energy sources in the meantime — through his five-year plan to make all city buildings solar powered.

“Imagine the demand that creates for energy audits, for solar power, for photovoltaic panels on city buildings, imagine the expansion of small business, and the bringing in of new businesses here,” he said. “Contrary to what half of the Congress of the United States says, climate change is not a liberal plot. It exists.”

DeMaio said he agreed San Diego should be the sunshine capital, while also focusing on affecting energy demand, which is where “the cost-efficient reform to energy will come from.”

He calls for the city to use power purchasing agreements for city buildings to generate renewable energy but also improve energy efficiency, and to use Property Assessed Clean Energy (PACE) programs to encourage projects that promote sustainable energy use.

PACE programs finance renewable energy installations or sustainability-promoting projects by having property owners, either residential or commercial, agree to an assessment on their property taxes, rather than paying for the projects up front and paying off the debt over time.

“It’s a no-brainer; it’s a market-based mechanism that will create a lot of incentives for energy conservation in San Diego,” DeMaio said.

He also said he supported increased targeting of state and federal tax incentives, which he said stood in contrast to his opponent. He accused Filner of not acting consistently with his support for energy conservation by voting against the Energy Policy Act of 2005.

Filner’s campaign did not respond to a request for the rationale behind Filner’s vote against that bill. The bill, passed with a 57 percent majority, was opposed in the House of Representatives by 160 Democrats and 22 Republicans.

Repeating responses that have become stock since the June passage of Proposition B, the ballot initiative that if approved by courts will transfer most new city hires to a 401(k)-style retirement plan and attempt to freeze employee pay for another five years, Filner promised he’d enact the will of the voters while DeMaio pointed out that Filner called the DeMaio-led initiative a fraud throughout the primary election.

Filner didn’t mention his plan to issue pension obligation bonds, which would refinance the city’s pension debt by extending it further into the future, to inject $500 million to restore city services and infrastructure investment. Since the primary Filner has wavered over the need to issue POBs, but has most recently said he still plans to do so.

He also said his relationship with city labor unions would make him better suited to negotiate the five-year pay freeze, while DeMaio’s adversarial relationship would force yearly negotiations.

DeMaio said Filner not attending a recent court case over whether the city could implement Prop. B demonstrated his lack of commitment to the cause. Filner added that the city’s currently in a hiring freeze because, in his words, the initiative was so poorly crafted that the city had no other choice.

Prop. A and union contractors

The candidates hashed out another argument from the spring, debating their positions on union contractors and project labor agreements.

Making the basic ideological case for Proposition A, the June-approved initiative to ban project labor agreements on city projects, DeMaio said union contractors had a right to work on city projects only if they produce the lowest bid in a “fair and open” bidding process with the winning contract and all other bids posted online.

Filner, making the case against Prop. A from before it won voter approval in June, said state law already requires fair and open competition and the city stands to lose $150 million, based on last year’s example, in state construction contracts as a result of passing the PLA ban.

Filner began his response to a question on the City Council-approved expansion of the Convention Center — which allowed hotel owners to vote on whether to self-assess a property tax to finance the project, a maneuver to nullify Proposition 13’s requirements that two-thirds of voters approve any tax increase, and is currently awaiting court approval — by saying he supported the project but opposed the financing plan.

He added that if courts validate the maneuver, he’d have a better chance of securing approval from the California Coastal Commission, since it largely supports his candidacy.

DeMaio emphasized the necessity of the project for keeping Comic-Con from leaving San Diego and for bringing to town other trade shows of similar size.

Both candidates declared their commitment to combating homelessness in the city.

DeMaio, calling it not only an economic and quality-of-life issue but also a moral responsibility, emphasized the importance of securing the future of the city’s permanent homeless shelter, Connections Housing.

If the downtown, full-service center is successful, he said, the city could secure funds to place similar facilities in other parts of the city.

“We need to get the funding, and that’s why I supported at City Council two weeks ago a resolution to make Community Development Block Grant (CDBG) funds a priority for homeless services,” he said.

"And we also need to hold the county of San Diego, our Health and Human Services local, accountable for getting the dollars into the mental health programs, the substance abuse programs.”

Filner said he has demonstrated a lengthy commitment to homelessness, while DeMaio only discovered the issue when he began his mayoral campaign.

Filner cited his work on the Department of Veterans Affairs’ 2009 plan to end veteran homelessness in five years, and a previously stated plan to secure large buildings like below-market hospitals or hotels that could house 300 to 400 individuals at a time.

DeMaio is seen as the friendlier candidate on building codes and the regulatory environment facing the debate’s audience (BOMA members). Filner, however, took the opportunity to say that if the commercial real estate industry says it’s being hurt by regulations, then the city needs to deal with their concerns.

The city should develop a fee schedule and guaranteed time frame for each permit type so businesses would have cost certainty around their permitting needs, Filner said.

DeMaio, who said politicians offered platitudes about cutting regulation while he succeeded in providing regulatory reform last summer relating to Business Improvement Districts and again in the spring on city infrastructure projects, similarly said businesses should have a money-back guarantee if permit requests go beyond a certain point.

“I’m glad to see that Bob is now supporting one of the major tenants of my development services overhaul plan, which will move us to fixed-price, time-guaranteed permits,” he said.

He also proposed a system of self-certification.

“If you have an engineer and architect that have professional liability on the line and they have already signed off, why in the world do we need you to go convince some government bureaucrat?” he said.