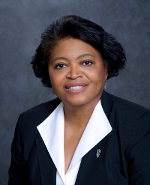 Thella Bowens became CEO and president of the San Diego County Regional Airport Authority within two months of it being established after the airport’s separation from the Port of San Diego.

During the last year, a much-anticipated transformation at San Diego International Airport was completed under her watch. The Green Build, as it was named, served as both an expansion to the airport and a testament to the airport’s environmental stance under Bowens’ tenure.

“I think what has happened here is not as good a news story for the airport as it has been a good news story for the community,” Bowens said. “I’d like to think that it was because of me, but really we had a tremendous team, starting with our board, and the tremendous amount of staff support -- people who led this project.”

The nearly $1 billion project was completed $45 million under budget. Because of the recent recession and lower interest rates, Bowens said the Airport Authority also saved $40 million on financing costs.

It was “a banner year,” Bowens, who holds a bachelor’s degree in political science from Barnard College, of Columbia University, said.

Having worked at the airport for 17 years, including when it was under Port control before 2003, Bowens has seen days when the direction of the airport was less clear.

But the Airport Authority decided to put the plans on hold until the San Diego community was able to voice its preferences on whether the region’s major airport should be somewhere other than Lindbergh Field. In 2006, San Diego County voters rejected Proposition A, the advisory measure that could have kept discussions going about a possible relocation of the regional airport to Marine Corps Air Station Miramar.

Once the voters said no to Miramar, the Airport Authority, Bowens said, “moved forward to make this site the very best that it could be.”

Under her leadership, the airport’s Sustainability Policy was adopted in 2008. One goal in that is to have every new facility be built to LEED Silver standards.

The Green Build has possibly been the most talked about of things in 2013 when it comes to the Airport Authority. But another, albeit somewhat related, task has been near the top of Bowen’s to-do for years: improving airport concessions.

“We had the same concessions operations for 25-plus years, and on Nov. 30 of last year, 2012, at midnight, we closed every single one of those stores -- retail and food and beverage -- and by 5 a.m. the next morning, we re-opened either new permanent stores or temporary stores that reflected our new program. Now I think we have 67 stores open.

“I think people have noticed in the new terminal, but what a lot of people don’t realize is that spreads through every terminal. It’s changing significantly.”

Aug. 6, 2013 -- Reporter Carlos Rico gives a behind-the-scenes look at the new Terminal 2 at San Diego International Airport. Construction has been completed on the $907 million project, called The Green Build, and it opens to all travelers on Aug. 13.