But perhaps the best service he performs is for his clients.

A partner at Hecht Solberg Robinson Goldberg and Bagley LLP who specializes in land use issues, Robinson has his fingerprints on some of the biggest developments in San Diego County.

He recently helped The Irvine Company obtain the necessary approvals to build La Jolla Centre II. It's the first office building to receive approval in San Diego since Diamond View Terrace, which opened in downtown's East Village in 2008. 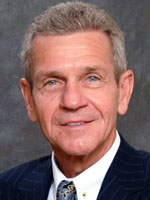 Robinson is also helping develop a 300-acre master-planned community in Carroll Canyon called Stone Creek. It will be built on the site that currently houses the Vulcan Materials mining operation. Robinson expects the project will be presented to San Diego City Council this summer.

"He's clearly the fellow that gives us our reputation for land use," said Darryl Solberg, Hecht Solberg's managing partner. "He came out of [former San Diego Mayor] Pete Wilson's office. He had so many contacts with people that make decisions on real estate at that time, and he's built upon that."

Robinson was Wilson's assistant for program and policy development from 1978 to 1980. He also spent seven years in the San Diego city attorney's office and has been with Hecht Solberg since 1980.

“He knows how to build relationships,” Solberg said. “He’s truly a magnet. Virtually everyone trusts him because he does the job well, and he works with people really, really well.”

GLJ Partners was seeking to build an apartment complex, Fat City Lofts, across the street from Solar Turbine’s plant in a move that Robinson said would have forced the company to search for a new location, likely outside of San Diego. The Centre City Development Corp., however, denied Fat City’s application.

“We're now in the process to amend the plan so no other residential project can be proposed within 500 feet of the Solar Turbines property,” Robinson said.

Robinson also is active in the community. He is a member of the San Diego County Regional Airport Authority board, during which time they’ve added nonstop flights to Tokyo and Washington, D.C.'s Reagan National. The airport authority also is in the midst of adding 10 new gates to Lindbergh Field in a project called the Green Build.

The board also is working on getting all the rental cars removed from Port of San Diego property and consolidated into one facility on the north side of the airport.

“It's just something I wanted to do,” he said of his airport authority term, which expires in January 2014. “I like serving.”

Additionally, Robinson is chair of the Mission Bay Park Committee and vice chair of the Downtown Parking Management Group, which oversees all public parking in downtown San Diego.