By JENNIFER McENTEE, Special to The Daily Transcript
Friday, October 15, 2010

So much depends upon an FDA decision.

For millions of type 2 diabetics, the potential federal approval of Bydureon on Friday, Oct. 22, is the difference between taking a medication twice a day, or just once a week.

For San Diego-based Amylin Pharmaceuticals (Nasdaq: AMLN), the U.S. Food and Drug Administration's decision sets into motion sales, marketing, manufacturing and the potential for profitability by the end of 2011. Analysts have predicted Bydureon could generate sales of anywhere from $1 billion to $6 billion. The launch of Bydureon alone would trigger a $40 million milestone payment from partner Eli Lilly and Co. (NYSE: LLY).

The FDA could say yes, no, or even not yet, as it did in March, when the federal agency asked for further details on plans for labeling, risk evaluation and mitigation, and manufacturing of Bydureon.

Amylin President and CEO Daniel Bradbury, 49, said in a recent interview that he is undeterred by the unknown. "Part of the skill of a leader is to help a company to live through times of great uncertainty."

Since Bradbury succeeded Ginger Graham in March 2007, Amylin has been working toward profitability. Amylin is leaner today due in part to outsourcing and a series of layoffs.

"One of the things that I've always focused on is putting that discipline in place to deal with uncertainty," said Bradbury, who has been with Amylin since 1994, in positions ranging from corporate development to chief operating officer. "Then we have the ability to determine our own destiny.

"How can we change the lives of patients if we don't have the financial capability?"

Amylin already has two FDA-approved diabetes drugs, Symlin and Byetta. Symlin is an analogue of the human hormone amylin, a partner to insulin and the company's namesake. The active ingredient in Byetta is exenatide.

Amylin, together with Lilly and Waltham, Mass.-based Alkermes Inc. (Nasdaq: ALKS), developed Bydureon to deliver continuous levels of exenatide in a single weekly dose. By contrast, Byetta is administered twice a day. 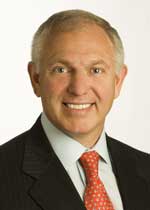 Bradbury says that while Bydureon could work for the same diabetics who already use Byetta, the potential audience for Bydureon could be larger because it has been shown to better control blood sugar. The weekly dosing is designed to minimize fluctuations and keep "exenatide on board all day," he said.

"This is a big step forward. It could change everything about the way we treat diabetes," Bradbury said. "In terms of lifestyle, it's very different for a diabetic to, on Sunday morning, take a single medication, instead of remembering to take something twice a day. One of the key things about people with diabetes is that they often don't just have elevated blood sugar. They may be on other medications, for high blood pressure or other conditions."

Billion-dollar sales for Bydureon would be shared equally between Amylin and Lilly through their development and commercialization deal for exenatide.

A broader pipeline of commercialized drugs, together with Bradbury's brand of fiscal discipline, will "put us in a position to be a profitable company," he said. Amylin would be in the black for the first time in its 23-year history.

"We have to earn the right to do it again," Bradbury explained. "Once we're profitable, we can feed those proceeds back into the operation to create new products."

Shares of Amylin stock have been trading between $11.01 and $24.21 in the 52-week range. The company's market capitalization is $3.02 billion. Analysts for both Deutsche Bank and Jefferies & Co. issued "Buy" ratings for Amylin last month, citing the long-term sales potential for Bydureon.

While Amylin has reduced its local footprint, about half of its 1,500 people are in San Diego. Another 20 percent of Amylin's employees are at its new manufacturing facility in Ohio, and the rest are salespeople scattered across the country, Bradbury said.

"This is an incredibly complicated industry," said Bradbury, who is also board chairman for local life sciences trade group Biocom. Health care reform, scientific innovations and an ever-shifting regulatory environment mean companies must be able to adapt quickly, he said.

"It's important for people to understand how rapidly the environment for biopharmaceuticals is changing," Bradbury said. "To borrow an expression from Wayne Gretzky, we need to 'skate where the puck's going, not where it's been.'

"We look at the value that new medicines bring to society and the individual, and are making adjustments for where we need to be. We're living in an era with an unprecedented rate of change."