The touring production features an outstanding cast, including comedy writer and "Hollywood Squares" veteran Bruce Vilanch in the hefty role of Edna Turnblad.

The show is based on, and retains, the high camp of the 1988 film of the same name by indie film auteur John Waters. Waters has always portrayed big-hearted outsiders whose weirdness eventually triumphs over the conventional.

The musical, like the film, takes place in racially segregated Baltimore in 1962. The story follows short, plus-sized teen Tracy Turnblad on her bid to get on an American Bandstand-like dance show. After learning some soulful moves from a black friend, Tracy makes it onto "The Corny Collins Show," sharing airtime with the slender, all-white, beautiful kids.

A perennial optimist, Tracy never doubts her own ability, style or outrageous helmet-like hair. It doesn't take long for her to win the spotlight and boyfriend away from popularity princess Amber Von Tussle (Jordan Ballard). Having achieved her goals so quickly, she turns her attention to integrating, via television, the racially segregated city -- a topic played with a proper dose of sincerity in the ridiculously campy musical.

But when the pro-integration rally she organizes gets her arrested, it's up to her friends and family to bust her out in time to compete for the title of Miss Hairspray 1962 -- and promote racial equality. 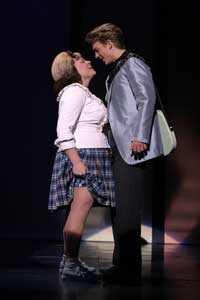 From the opening sequence of "Good Morning Baltimore," the audience is treated to David Rockwell's cartoonish, colorful and eye-popping sets. If "Hairspray" had nothing else going for it, it would be worth seeing to indulge in Rockwell's creations -- not to mention William Ivey Long's deliciously bold costumes, and Paul Huntley's handiwork with wigs and hair design.

But luckily, we get more. The touring cast here gives strong performances. Keala Settle as Tracy seems always to be in motion -- it's a surprise she's able to keep her robust size with the workout she must get every night.

While this cast may be vocally less over the top than the original, it could be construed as an improvement. Settle is enchanting as she sings "I Can Hear the Bells," and her voice is fuller and more soulful, less whiny, than Marissa Jaret Winokur's, who originated the role.

And Vilanch, though still limited, has a wider vocal range than originator Harvey Fierstein as Tracy's super-sized mother. Sans Fierstein's low, gritty voice, Vilanch more successfully crosses over from a character clearly played by a man to one that, with a little suspended disbelief, is just a big burly woman. One of the show's highlights is the sweet and very funny soft-shoe duet "Timeless to Me," performed by Vilanch and Todd Susman as Tracy's father.

Vilanch, who has written for every major awards show and many popular entertainers, is a master of timing and improvisation. Much of the humor is era-appropriate ("I'm like a book of green stamps -- beyond redemption."), but Vilanch's surprising comedic punches at local politics are met with enthusiastic laughter.

Also exceedingly fun to watch is Sandra Denise as Tracy's best friend Penny Pingleton, a loveable space cadet. Denise's off-tempo dork dancing is a riot and provides a grand payoff to her makeover at the end. Terron Brooks as Seaweed, the lanky, smooth-talking friend that teaches Tracy a thing or two about dancing to "jungle music," struts his stuff in "Run and Tell That." And Charlotte Crossley in a brassy blonde wig as Motormouth Maybelle, Seaweed's mother and host of "Negro Day," has got attitude up to here, belting it out on the gospel-like "I Know Where I've Been."

O'Brien's Tony for directing is well deserved, as is much of the hype for "Hairspray." The story may be as light as aerosol, but this production is like the best hairspray on the market -- firm, in control, holding ultimate style and never flaky.