Yasmina Reza's "Art," now playing at Lamb's Players Theatre, feels a bit like the circuitous debates in which its characters participate: indulgent and abstract.

Yasmina Reza's Tony Award-winning comedy-drama "Art" opened in 1994 and went on to stunningly positive reviews in both Paris and London in subsequent years. Yet for its indisputably laugh-out-loud moments, "Art," now playing at Lamb's Players Theatre, feels a bit like the circuitous debates in which its characters participate: indulgent and abstract.

Serge (Paul Eggington), a successful dermatologist and dilettante, proudly spends $100,000 to purchase a five-by-four painting by the renowned (and fictional) artist Antrios. The painting is entirely white, with diagonal white strokes across it. It very much resembles a blank canvas. Serge couldn't be more enamored with it.

Meanwhile, best friend Marc (Robert Smyth) has a viscerally opposite reaction toward the piece. He takes Serge's purchase as a personal affront to their friendship, and the difference of opinions causes a rift in their relationship. Yvan (Tom Stephenson), the men's less intellectual, opinion-less and appeasing friend who's got problems of his own, is also brought into the fray.

There's some discussion here about representational art vs. modernism, and the value and importance of art, but the play is more about relationships than art, or rather, art as metaphor for relationships.

As the longtime friends argue in circles, old secrets are revealed: Serge has never liked Marc's wife, finding her vile and repugnant; Serge and Marc agree that Yvan absolutely should not marry his fiancee; each of the men has unexpected reasons for befriending the others. All of them must now re-examine their relationships -- their manipulations of friendship and whether their motives for friendship are even valid.

Is it enough that the painting makes Serge happy? Just why is Marc so angry about the painting, anyway? Do the purchase and attendant attitudinal divide between Serge and Marc somehow reflect on their friendship? Does Marc's opinion even matter?

These are the sometimes intriguing, sometimes lackluster questions that swirl around Reza's play. Yet other nagging questions that plague the very premise of the play are never answered: What ever brought these unlikely candidates together into friendship in the first place? 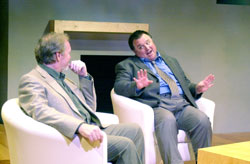 The play's rhythm and comedy depend upon the synergy of its players, and Lamb's veterans Eggington, Smyth and Stephenson do seem to have it organically. Their characters viciously attack each other (verbally and physically) in a way that only old friends can, but there's no discernable reason why they should be friends at all.

Another question: Do men really talk like this? There's a moment when Serge and Marc discuss the nature of their relationship as it was and as it stands -- based on mentorship and flattery, and tainted by jealousy. The conversation may play well to European audiences, but it feels awkward and improbable among American male characters. Some productions in the United States have made the three characters women, a change that would likely make parts of the dialogue more digestible.

Mike Buckley's almost too minimalist scenic design uses beech hardwood flooring and simple living room and bar furniture to represent the characters' various apartments. A frame projected in the space above the mantle provides the only hint of scenery change, leaving us with mostly just the dialogue to figure out whose apartment we're at in any given scene. And Jeanne Reith's costume design doesn't adequately reflect the personality and socio-economic differences between the three men as it could.

Finally, the play fails to garner much concern about the characters and their dilemmas. The only character even remotely likeable (though really more pitiable) is Yvan. We meet him first crawling around on the floor, searching for a pen cap. And that's metaphorically where he stays, variously stepped on and dismissed by his supposed friends. But actor Tom Stephenson garners some of the best laughs with his portrayal of the weepy, insecure buffoon. Stephenson's extended monologue of the fevered frustration surrounding Yvan's impending marriage is the highlight of the show.

The question, as Marc repeatedly puts to Yvan to force an opinion on the painting, is: Does it move you? This production, unfortunately, does not.