This weekend, more than 75 regional dance companies and solo dancers comprising more than 700 artists will descend upon Balboa Park to participate in three days of performance, lectures and workshops.

The Celebrate Dance Festival, now in its ninth year, is a panoply of ethnic heritages, abilities and dance styles -- including ballet, ballroom, flamenco, hip hop, jazz, modern, swing, tap dance and much more. Performances take place in the 600-seat Casa Del Prado Theatre and on two outdoor stages. And it's all free and open to the public.

Festival organizer Eveoke Dance Theatre has always presented the event as a gift to the community -- until recent years bearing the entire cost. But lately the organization has received financial support, through some fund-raising and grants from local government. This year Eveoke received a $10,000 grant from Supervisor Pam Slater and a $2,000 grant from Supervisor Greg Cox to produce the event.

"In a year where everybody's funding was getting cut, they upped ours by $500 over the last year," said Eveoke and festival producer Chris Hall.

Now, many of the participating artists are paid, an impossibility in the festival's first years. And the event that's billed as the largest dance gathering west of Chicago attracts more than 10,000 people throughout the weekend. 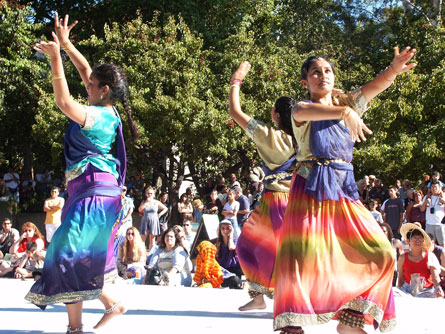 Eveoke also will present three works for the festival: a performance from its haunting and critically acclaimed show "Mothers," and two newer pieces set to music and spoken word by socio-political poet Ursula Rucker.

Though it may be the driving force behind the festival, Eveoke isn't interested in being in the spotlight as organizer. The group has much loftier goals.

Eveoke hopes to promote and expand the dance community as a whole in San Diego. In the lobby of the Casa Del Prado Theatre, a dance information center provides brochures, program information and upcoming events for every group involved.

Known for its grassroots social activism and political art, Eveoke is also intent on bringing diversity and accessibility to an art form that is, though elemental, often marginalized.