Three current and very different exhibitions at the Museum of Photographic Arts in Balboa Park find common ground in creating a space for reflection. "Circle of Memory" is being presented in conjunction with "Recent Gifts: For Eye and Mind" and "David Fokos: Borrowed Time."

"These three unique exhibitions are not so dissimilar," says Carol McCusker, curator of photography at MoPA. "They empower the viewer and encourage contemplation."

"Circle of Memory," on view through Nov. 7, was created by six contemporary artists and commemorates children who are missing or who have died. Inspired by ancient burial practices, the installation consists of a straw bale ceremonial structure and a series of photographs of curbstones that surround an Irish cairn.

Visitors enter a passageway built of straw bale and into a high circular chamber. Inside, there are straw bales on which to sit and meditate. The faint sounds of children's voices fill the space. Salt falls to the floor as in an hourglass, forming a mound that will grow during the installation, symbolizing the passing of time.

Upon exiting, visitors may write a message on a card provided and place it in the wall of the structure. Visitors are also welcome to attach photographs of their loved ones. At the end of the exhibition at MOPA, the artists will take the written messages and photographs left by visitors and place them in a straw bale that will be used in future installations.

Artist Eleanor Coppola, who with husband and film director Francis Ford Coppola lost a son 18 years ago, felt the need for a meditative space to reflect on the loss of a child. She envisioned a large straw bale structure, and the project evolved over a period of five years.

In 1996, Coppola visited UC Berkeley historian and artist Jean McMann in Ireland, where McMann was studying Irish cairns -- large stone structures with a low passageway leading to a circular chamber with a high ceiling. It is believed that Neolithic cairns, dated circa 3000 BC, were dedicated to rituals pertaining to death and renewal.

Culled from many hundreds of recent donations, these images represent a variety of photography techniques from the 20th century. Curator McCusker chose just a few to allow contemplation of each image and to demonstrate the power of photography in a rapidly changing world.

"In light of all that we see in the media and on the Internet, this is an exercise in slowing down in order to look, see, feel, critique and understand what it is a photographer does in making an image," said McCusker. "This takes time and thought. This exhibition offers that through a few carefully chosen images, and quotes to aid the viewer." 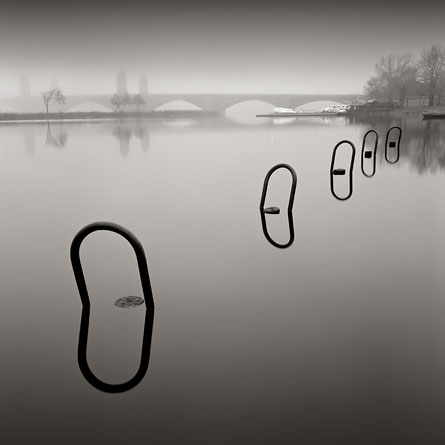 "Mooring Rings, Study #1" is part of a series of black and white photographs that communicate the artist's theme of time. The exhibition "David Fokos: Borrowed Time" is on view at the Museum of Photographic Arts through Nov. 7

The exhibition includes a large-scale photograph by French photographer St?phane Couturier called "Olympic Parkway #1, San Diego, CA" (2001), taken while he was an artist-in-residence at UCSD. His image documents the rapidly changing landscape in San Diego County.

Also on display is Los Angeles photographer Fred Roberts' 2003 color digital image called "Gau Ghat," featuring a flurry of people from India in brightly colored saris. Terry Falke donated a photograph of train tracks ending in the desert, one of his many portraits of the changing terrain of the American Southwest.

Each photograph hangs in its own pool of light, to allow the visitor to contemplate its singular meaning.

"Each image will be isolated with blocks of darkness around them so that the viewer can experience each photograph without the competition of too many images. We already suffer from that kind of overload out in the world," says McCusker.

"David Fokos: Borrowed Time" features a selection of the artist's black and white photographs, mounted on aluminum. Minimal and graphic, the images are accentuated by this sleek and contemporary presentation. The exhibition is on display through Nov. 7.

Fokos works with long exposures that communicate his theme of time. He articulates the underlying form and shape of the world around us, seen especially in the still horizon line of land and sea. Many of the pieces slow time down to reflect on how we perceive time passing. Singular objects on a horizon line, such as rocks or a ferry dock, anchor the viewer within the photograph.

Combining computer technology with classic photography techniques, Fokos captures his images with a large-format, 80-year-old wooden camera and employs digital manipulation when it serves the image.

Museum hours are Monday through Sunday 10 a.m. to 5 p.m. and Thursdays until 9 p.m. Gallery admission is $6 for adults; $4 for students, seniors and military; and free to members and children under 12. Admission is free to the public on the second Tuesday of the month. For more information about the exhibitions, visit www.mopa.org.