The red carpet will roll, with celebrities, paparazzi, parties and, of course, films. No, it's not Sundance or Cannes. The festivities take place right here in San Diego -- or, as the folks from the San Diego Film Festival like to call it, Hollywood South.

The five-day festival starts Wednesday, Sept. 29 in the Gaslamp Quarter downtown and features feature length, short and documentary films; educational workshops and panels; Q&A sessions with filmmakers and cast members; guest appearances by film stars; and some of the glitziest parties in town.

The festival got off to a modest yet astonishingly successful start in 2002 with attendance of about 15,000 and loads of media coverage. It's grown yet again. The San Diego Film Foundation, which produces the event, hosted its first screenwriting contest, garnering more than 600 entries. More panels and workshops have been scheduled, and another, fourth auditorium has been added at the Pacific Gaslamp Theatre. The screening committee received more than 1,100 film submissions this year, and had the monumental task of narrowing down the entries to just 85 films.

"We always look for strong acting performances, and all films must be a San Diego premiere," said Robin Laatz, the festival's founder and executive director. But aside from these qualifications, the festival is open to all types of films. It's the only non-exclusive film festival in San Diego.

Still, it was a big year for documentaries, according to Laatz. That may have something to do with the huge commercial success of documentaries like Michael Moore's "Fahrenheit 9/11" and Morgan Spurlock's "Super Size Me."

"The choices were probably most difficult for documentaries this year," said Laatz. "I think with films like ('Fahrenheit 9/11') and films like 'Super Size Me' that filmmakers are seeing that if you've got the right story, there is a broader market for documentaries. I think that's inspired a lot of people to start making more of them, which is fabulous."

Two highly anticipated documentaries at this year's festival are "Goodnight, We Love You," about the life of legendary comedienne Phyllis Diller, and "Sonny Boy," directed by Soleil Moon Frye (child star of "Punky Brewster" fame), about reconciling the relationship with her father in the face of his worsening Alzheimer's disease.

Diller will also receive the Governor's Award, which is awarded to an artist who has crossed media lines -- theater, film and television -- "with grace, and who's been a role model and inspiration to others," said Laatz. 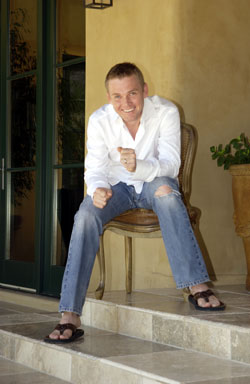 Schroder, who starred in the critically acclaimed "NYPD Blues," will be on hand to screen his new film, "Black Cloud." Schroder wrote, directed and produced the film about a young American Indian boxer who comes to terms with his heritage while fighting his way to a spot on the U.S. Olympic boxing team.

"Black Cloud" was shot on location at a Navajo reservation in Arizona and Las Vegas, but it also has a local connection. It was financed by Indian tribes, including the Viejas Band of Kumeyaay Indians.

Schroder was inspired to write "Black Cloud" by a real-life boxing coach in Arizona on the Navajo Nation that uses boxing as a tool to help kids overcome drug and alcohol abuse.

"But 'Black Cloud' is a universal story in the sense that it could be told about a Mexican kid fighting in San Diego or a black kid fighting in the Bronx," said Schroder. "The movie is really about all of us that have ever had to fight in our lives for anything that was worth anything."

The San Diego screening will be an early opportunity for audiences to view Schroder's work before it opens in wide release to the Southern California market in November. Schroder will also be the special guest at the Chairman's Reception Sept. 30.

"It wasn't hard to convince me to come," he said. "San Diego is a beautiful place. I'm always excited to see my film play for a new audience and see the reactions to it, so I really look forward to coming out there."

Special events include the opening night premiere party at Jimmy Love's and an industry party on Oct. 1 at the Culy Warehouse, where anyone in the film industry -- or looking to break into it -- can network with directors, producers, screenwriters, actors, production companies and agents. The black-tie Actor's Ball and Awards Ceremony on Oct. 2 is the festival's premiere gala, and will honor filmmakers in 13 competitive categories. A closing night film and wrap party on Oct. 3 at Nectar, located inside the Prava Hotel, will present the Audience Choice Awards.

Tickets are $60 for screening passes. Festival passes are $89 and get you into all screenings, panels, seminars and parties. Individual tickets to panels and seminars are $5, and film screenings are $10. For complete festival schedule, visit www.sdff.org.