"Fiction," now playing at The Old Globe, is a lush literary landscape, but Steven Dietz's ultimately flawed play fails to engage its audience.

When Linda and Michael first meet in a Paris caf?, the rapid-fire banter and witty, argumentative discourse -- along with proverbial sparks -- fly. The pair engages in a heated debate over the greatest rock vocal performance of all time. Michael, in all sincerity, claims it's John Lennon on "Twist and Shout," while Linda makes a passionate argument for Janis Joplin on "Piece of My Heart."

It's a playful and promising start to "Fiction," which runs through the end of the month at The Old Globe's Cassius Carter Centre Stage. Swirling around the drama are questions about deception and truth, love and betrayal in marriage. It's a rich field from which to mine, but Steven Dietz's flawed play doesn't fulfill the dramatic potential of its subject matter or this first charming scene.

Fast-forward 20 years, and Linda and Michael, long married, are still lovingly combative. Theirs is the kind of intimacy that comes from mutual understanding and brutal honesty, or so it seems. They are both novelists -- Linda the author of a critically acclaimed fictionalized account of her rape in South Africa, and Michael a prolific hack -- that trade in fiction.

Their happy life is disrupted when Linda is diagnosed with a plum-sized brain tumor and given three weeks to live. She has two requests before she dies. Both prolific journal keepers, Linda asks that she be allowed to read Michael's journals, and that he read hers once she's gone.

These most intimate of thoughts are rarely meant for consumption by others, and it turns out that Linda and Michael have been keeping secrets. Michael's journals include voluminous references to an obsessive love affair with a woman named Abby, who Linda also has mysterious ties with.

The play raises some intriguing questions, including whether an affair of the heart is as damaging as an actual affair, and whether there are some secrets that should never be revealed, even in the most open of relationships. Perhaps, as Linda suggests, the only thing more difficult than dying with a secret is living with one.

Yet Michael and Linda are flawed characters, not only in the sense that they have failings, but also in the manner in which they are written. Playwright Dietz has failed to give them a wholeness that makes them human, relatable or even likeable.

Both novelists suffer from their own sense of disappointment. She's a college professor who throws snide quips at her students ("You there, in the back, my young friend of ambiguous gender"), borne from her failings as a writer and her "one-trick pony" self-esteem. Michael has become the kind of writer he never wanted to be, whose commercial works are readily adaptable to movies ("They call it a medium because it is neither rare nor well done").

Full of pretensions, snarky quips and bluster, Linda and Michael are likely people who would irritate you in real life, which makes them a little hard to stomach in a two-hour play -- however literary and clever Dietz's language might be. 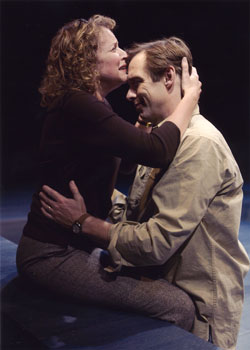 Nance Williamson's Linda is full of fire. Only occasionally do we see the tender, regretful woman that's dying -- though Williamson is at her best in these scenes. That Linda does not engender much sympathy is due more to Dietz's frosty script than Williamson's performance.

The same is true of Kurt Rhoads' well-acted but deficient Michael, who is casual in the face of Linda's impending death and his journalistic revelations -- almost to the point of cruelty. Before he lets Linda read his journals, Michael tears out a single page and stuffs it in his wallet, only to reveal to her later that the page is blank. His reasoning: He wanted her to imagine the worst, only to show her that the worst never happened.

Abby, too, played by Rachel Fowler, is a severe, cold woman who barely once cracks a smile. She hardly seems "achingly vibrant," as Michael calls her, and there's almost no discernable reason for him to pursue her -- either in fact or fiction.

The play finally twists and turns on the mystery of Abby, and we learn that Linda is not without her own secret. But the developments at the end of the play feel contrived, too facile and almost gimmicky -- and have less impact than the playwright likely intended.

More successful is Robin Sanford Roberts' unfussy yet effective scenic design. Her blue-washed hardwood stage features a fissure that runs diagonally through the center, representing the rift in the couple's marriage and the divide between fact and fiction.

Much of Dietz's literate dialogue and poetic metaphors are a pleasure to experience. It's just too bad they come from the mouths of characters that have failed to get us invested in their "Fiction."

Show times: Sundays, Tuesdays and Thursday at 7 p.m.; Thursdays, Fridays and Saturdays at 8 p.m.; Saturday and Sunday matinees at 2 p.m.