Before Alfred Hitchcock made in 1954 what's known as a film classic, "Dial M for Murder" appeared as both a television production and a stage play.

Now Lamb's Players Theatre is taking a stab at the half-century old murder mystery by Frederick Knott. Lamb's stylish, though not always thrilling thriller, is none the worse for wear, if viewers remember its historical context.

There are just five motives for murder, claims Max Halliday, Margot Wendice's one-time adulterous lover and writer of murder mysteries: fear, jealousy, money, revenge and protection of someone you love. Husband Tony Wendice, it turns out, can check off three out of five.

It's been a year since Max and Margot's affair ended, but Tony still wants revenge. Not to mention there's the matter of Margot's rather large inheritance.

The story revolves around Tony's scheme to off his pretty, pampered and very rich wife. "Dial M" is different from your typical murder mystery in that we know from the outset "whodunit," and the thrill comes from watching Tony wriggle his way out of unexpected circumstances. Rick D. Meads does a fine turn as the calculating and quick-witted Tony, though we'd like to see more distinction between the character's alternately charming and reptilian sides.

"Dial M" is set in just one locale -- the Wendices' flat in post-World War II London. The play opens on Mike Buckley's dark and evocative set, decorated with antique furniture, throw pillows and doilies. Max (Matt Scott, likeable and thoroughly American with his heavy handedness, bluntness and passion) is back in England, innocently visiting his former lover. Meanwhile, Tony has been plotting murder for a year.

Much of the first half of the play consists of lengthy and at times tedious exposition. Tony lures Captain Lesgate (Nick Cordileone as the sleazy, mustachioed crook) to the flat, where he simultaneously blackmails and pays off the two-bit criminal to murder his wife. But not before Tony, a former playboy and tennis star, launches into a long-winded account of how he married Margot for her money, found out about the affair, anonymously stole her purse and then blackmailed her over an incriminating letter from Max, and has since been plotting revenge to reap a huge inheritance from her death.

But "Dial M" isn't all talk and no action; after enduring the protracted exposition, we're rewarded with the still gripping, still vicariously terrifying or (only subconsciously, of course) thrilling murder scene. But it's not Margot that gets murdered -- in the first of many plot twists, Margot momentarily foils Tony's plans by killing her would-be assassin.

Tony will have to think on his feet, because there are inconsistencies between the Wendices' story and the evidence. Inspector Hubbard (David Cochran Heath, channeling Columbo, adds some welcomed levity) is sniffing around with tough questions. And, there are improbable plot twists to contend with.

Jennifer Austin as Margot looks elegant and striking in designer Jeanne Reith's best costumes, which is appropriate, as her role sometimes seems largely ornamental. Margot's clueless incredulity gets a little hard to bear toward the end of the play, but it's more a result of Knott's script -- and the time period. 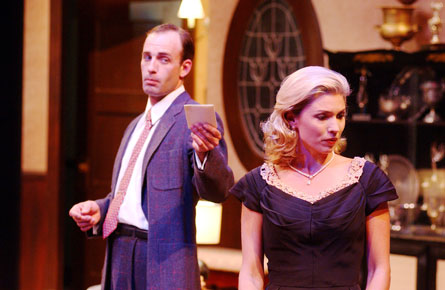 For more period inanities, check out the scene on the night of the planned murder, when Tony arranges for Margot to be alone in the house. When Margot indicates that she intends to go see a movie, Tony asks her to stay home and scrapbook old news clippings about his tennis wins -- and she, dutiful wife, complies. Or this scene immediately after the murder: Tony rushes home to find a dead man in his study and his wife shaking from the trauma of having killed a man in self-defense. His response is not to comfort Margot, but to command her to go back to bed. Again, she complies.

And for all of Tony's detailed machinations -- a glove laid just so, a suitcase in the proper place, wiping down everything Lesgate has touched -- Lesgate attempts the murder gloveless. But, after all, we're not watching an episode of "CSI." That's pretty apparent from the pacing, which may seem slow by today's standards.

But these are perhaps minor flaws, and the play's conclusion still satisfies. If you can overlook some of the dated aspects, Lamb's "Dial M" delivers strong performances and is an enjoyable piece of theater.