La Jolla Playhouse has an indisputable hit on its hands with "Jersey Boys," about the life and music of Frankie Valli and The Four Seasons. 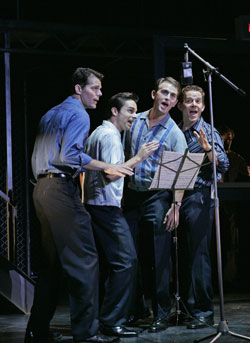 You've certainly heard the doo-wop, R&B and pop-tinged songs of The Four Seasons -- including such hits from the 1960s as "Sherry," "Big Girls Don't Cry," "Ragdoll" and "Walk Like a Man" -- performed here with verve and style by an outstanding cast. But you may not know the compelling story behind the group, told by Academy and Emmy Award-winner Marshall Brickman and Rick Elice in a book that is funny and thoroughly enjoyable -- if sometimes needlessly vulgar.

Then again, we are talking about four blue-collar boys who went from the mean streets of Jersey to the big time. We're talking sex, drugs (bookies, mobsters, leg-breaking debt) and rock 'n' roll, and "Jersey Boys" doesn't shy away from showing the dark underbelly of a group whose music is now sometimes seen as wholesome and corny.

The musical begins in the present, with a funk/hip hop version of "Oh What a Night" that was, we're told, a 2003 top 10 hit in Paris. Tommy DeVito (Christian Hoff) emerges to narrate a retrospective look at the formation of the group, from its first a capella gathering under a street lamp, through tumultuous times trying to gather members while they revolved in and out of the joint, to finding key members Francis Castelluccio, aka Frankie Valli (David Noro"a), and Bob Gaudio (Daniel Reichard), and rocketing to stardom.

Unlike "Mamma Mia!" based on the Abba catalogue, the Four Seasons songs aren't forced into serving a contrived storyline. Two or three tunes do fit nicely with the plot, but most of the songs are performed as if the group were in concert, in rehearsals or in the studio. Many of the roughly 30 songs in the show are brief snippets, or interspersed with dialogue to keep the story moving. But these musical morsels make it all the more exciting when the huge hits, "Sherry," "Big Girls Don't Cry," "Can't Take My Eyes off of You" and others get full play -- and sometimes a spontaneous standing ovation.

The pacing, particularly in the first act, is swift. The ever-changing props and sets seem to fly on and off the stage, including a few big, fun set pieces -- like a trio of Cadillacs -- that startle and delight audiences. Director Des McAnuff also makes use of black and white television cameras, splicing live shots with historical footage of "The Ed Sullivan Show" and "American Bandstand."

But all this activity could get sloppy in the hands of a less capable cast. Thankfully, this cast is engaging and pitch-perfect. Noro"a, who somewhat resembles the diminutive Frankie Valli, has a sound all his own but a sweet falsetto reminiscent of Valli's. Hoff as guitarist Tommy DeVito is both charming and rascally, as much as Reichard's fresh-faced, golden-voiced Gaudio is sweet and likeable. J. Robert Spencer, who was seen recently in the Globe's production of "Lucky Duck," plays bassist Nick Massi, the most underdeveloped of the main characters (and the "Ringo" of the bunch, he says). The foursome, all musicians who occasionally play instruments in the musical, provide strong acting performances equal to their singing chops. They are backed by a skillful band that adds a touch of modernity to these nostalgic tunes.

The four seasons are an apt metaphor for the life of this musical group. McAnuff projects Roy Lichtenstein-type pop art across four screens above the stage to colorfully highlight the group's "seasons," a springtime of big dreams, a summer of realization, a fall of fading passion and a tempestuous winter and final breakup. The musical ends on a bittersweet note, with a somewhat tense reunion for the band's induction into the Rock 'n' Roll Hall of Fame in 1990.

The musical is not without its flaws -- a melodramatic scene relating the drug-induced death of Valli's daughter feels wrong, and the second act attempts to cover too much and becomes somewhat disjointed. But these are minor blemishes that don't mar the overall pleasure and satisfaction of "Jersey Boys."

The world premiere musical just had its run extended for the second time due to overwhelming ticket demand, and it now runs through Jan. 2. If you're not a fan of The Four Seasons -- you will be after seeing "Jersey Boys." Do whatever it takes to see this Broadway-bound show before it closes!

Show times: Tuesdays through Saturdays at 8 p.m.; Sundays at 7 p.m.; Saturday and Sunday matinees at 2 p.m.