Bravo is back; Despite many changes, arts celebration still the same

What a difference a year makes. But guests at the retooled Bravo San Diego, the annual celebration of the performing and culinary arts, won't notice the mostly behind-the-scenes changes. 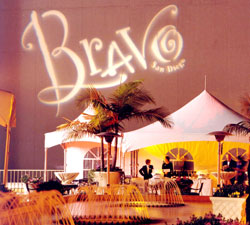 For starters, the San Diego Performing Arts League is no longer involved in the event, scheduled for Nov. 20 at The Westgate Hotel. The PAL has for the last five years produced the event along with the Westgate and Appel Presents. When the league decided early this year to refocus efforts on its own core programs, Bravo's future looked a little dicey.

But in the end, Bravo was incorporated as a nonprofit and equipped with a board of directors and an expanded mission.

The event was started in 1999 to showcase San Diego's diverse theater, music and dance companies to business and civic leaders -- a mission that remains at Bravo's core. The proceeds went toward the PAL's Business Volunteers for the Arts program. Each year the successful event has expanded, raising a total of $727,000 since its inception.

"Bravo had gotten to be so large, and was such an important fund-raising vehicle, that you needed to form its own 501(c)(3)," said Ron deHarte, executive director of the restructured Bravo. "And you needed to put effective governance procedures in place ... and be able to deliver what a nonprofit organization needs to deliver in the sense of credibility to the donors and organization throughout the year."

Instead of a single beneficiary -- the Performing Arts League -- this year, each participating arts organization will directly benefit from Bravo proceeds. Each of the 72 performing arts groups featured will receive a $1,000 honorarium.

"That's a huge shift in the way the event is benefiting the arts community," said deHarte.

Excess proceeds will be funneled into the newly established Bravo San Diego Performing Arts Fund. Interest earnings from the fund will be distributed to eligible organizations each year, but the principal will remain untouched.

"The intent would be to let that fund sit there and grow, and invest, and at some point in time when your fund balance is large enough, you would be able to start making grants to performing arts groups from that fund," deHarte said.

Also new this year: a whole slew of performing arts organizations. Bravo received more applications for participation than ever before, said deHarte, allowing for more diversity in programming. Along with the usual heavyweights like San Diego Repertory Theatre, Eveoke Dance Theatre and the California Ballet Company, more than 20 groups will make their Bravo debuts. Among them are the Christian Community Theatre, Tango Alma Dance Co., Hispanic-Mexican Ballet and Urban Tribal Dance Company. Bravo introduces these groups to wider audiences and potential patrons.

"It's nice with events like Bravo ... to be able to be seen and get some respect from ballet companies, modern dance companies, theater groups -- all kinds of performances that are a little more mainstream and a little more available to the public," she said.

One thing that never seems to change is the difficulty in securing corporate funding. Last year, donations were largely focused on relief efforts for victims of the wildfires that raged throughout the county. This time around, the elections may have had an impact.

"Funding is tight for everybody," said deHarte. "And the election year certainly hasn't helped us -- people's attention has been focused on the election and considerable dollars have gone to election campaigning."

Despite Bravo's evolution, deHarte said, patrons won't notice much change in the event. If anything, they'll see that it's a bigger, better and more diverse event than in years past, he said. There are more stages, more performers and more fare -- from 70 participating restaurants and wineries.

"Beyond that, it's the Bravo they've come to enjoy and expect," said deHarte.