If you're looking for a holiday alternative to the overstuffed "Nutcracker" buffet, try Sushi Performance & Visual Art's eclectic "Take-Out" menu.

Last summer, the itinerant arts organization had to move out of its space in the ReinCarnation Building downtown while the structure is reincarnated into Icon, a residential and retail high-rise. Until the new building opens in 2005, Sushi performs in various locations throughout the county as Sushi Take-Out.

Magpie Music & Dance Company is an Amsterdam-based collective that calls upon the Netherlands' rich tradition of improvisation as a model for creating collaborations between dancers and musicians. Duck is a modern dance improviser, while Oliver is a La Jolla-born violinist who received her Ph.D. from the University of California, San Diego. The pair will create a site-specific duet of music and dance comprising one-half of the evening's performance.

For the other half, San Francisco-based choreographer, dancer and vocalist Kim Epifano will present a new piece in what she calls "sonic dance theatre." The term represents her dance company's interdisciplinary approach to postmodern dance, soundscapes and physical theater.

"It's song with dance and theatrics involved," explained Epifano in a recent interview. "I call it sonic because it's more than just people singing; I very much am composing the sound scores that I use. I don't separate -- I compose the same time as I choreograph. It's a weaving of sonic ideas."

"Nonni" means grandmother in Italian, and "nonno" means grandfather. The duet with San Diego State University Theater and Voice professor Jeff Morrison is an exploration of the fictionalized intersection of their Italian immigrant family histories.

The inspiration for the piece came as Epifano began delving into her paternal grandmother's history. Isabella had spoken little English, and Epifano only recently learned that she had wanted to be an opera singer before settling into family life.

Around the same time, Epifano began to collaborate with Morrison, whom she became acquainted with while on a yearlong appointment at SDSU in the 2003-04 academic year. Initially they were "just playing around" with improvisation, said Morrison. Then Epifano discovered that they shared a common family history. Morrison's grandfather was also an Italian immigrant. As with Isabella, there were gaps in what Morrison knew of his grandfather Bruno. 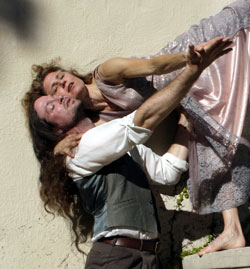 When Morrison told Epifano that he didn't quite know Bruno's story, she told him to "just make it up."

"It sounds sort of flip when you say it that way," said Morrison, "but basically what she meant was just improvise -- take what you know and invent something."

The collaborators then weaved together the stories of Bruno and Isabella to form "NonniNonno." Epifano and Morrison began to create a love story between these two characters based on what they knew of their grandparents' lives.

"It becomes a sort of fiction of facts," said Epifano of the performance, which is essentially a love story through time. The characters suffer the spectrum of emotions that people in relationships experience -- from the passion of youth to the slow fade of love.

"For me, the passage of time is a very moving part of it; it's woven into the love story," said Morrison.

Epifano and Morrison consider the new work to be operatic in its mixing of theater, music and dance, and its sometimes overstated sentiments. Yet the piece is as playful as it is intense. And though the story is fictionalized, there are emotional truths at the core, said Morrison.

But most of all, it's a celebration of love and family -- "It's a testament to the memory of our grandparents," Morrison said. And even minus the "Nutcracker," that's about as close to the holiday spirit as it gets.