Moments in the spotlight

After almost 23 years of photographing theater in San Diego, Ken Jacques has been witness to the city's shifting theater landscape. His historic, insider's perspective is now on view in his book, "The Play's the Thing: A Photographic Odyssey Through Theatre in San Diego." 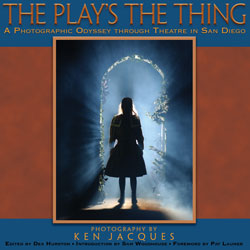 Photographer Ken Jacques' new book is a personal retrospective of the local theatre scene in a collection of his best works. Photo courtesy Sunbelt Publications

The book, released Dec. 15 with much fanfare and a reception at the San Diego Repertory Theatre, represents nearly 300 actors in 134 plays at 20 playhouses. It is a "tribute to San Diego theater," said Jacques in a recent interview. As such, it features commentary, anecdotes and insight by some star players in the local theater scene, including The Old Globe's Jack O'Brien, the Rep's Sam Woodhouse, La Jolla Playhouse's Des McAnuff, Sledgehammer Theatre's Kirsten Brandt, and actors Jonathan McMurtry, Linda Libby and Walter Murray, along with a foreword by KPBS theater critic Pat Launer.

In 1982, La Jolla Playhouse had yet to be reborn under McAnuff. The Globe had just celebrated its rebuilding efforts following the arson fire of 1978. The Rep was still performing out of a converted chapel on Sixth Avenue, and Lamb's Players Theatre had a small space in National City.

Jacques was an ex-archaeologist in 1982, trying to make the career change to photographer. He hadn't yet found his niche -- the area that would "produce that intangible feeling that fires the excitement of work," he says in the book's preface -- when he stumbled upon a theater assignment that changed his life. A friend who was in a production at the now-defunct Bowery Theatre downtown asked him to shoot the play's publicity photos.

"The first time I ever photographed a play," said Jacques, "I didn't sleep for three nights because I knew this was what I wanted to do. I was able to take those moments and bring them to life. It's an art form that's here for a very brief period of time -- it's very fluid, it's very alive -- and then it's gone."

More than 1,200 professional images later -- roughly 300 of which are included in "The Play's the Thing" -- Jacques is still enthralled by theater.

"Here's this group of talented people on stage that are just passionate about their craft, and it's up to me to be able to capture the moment that reflects that energy and passion," said Jacques. "To be able to hear the words or to feel the heat of the moment in a particular scene we've been able to capture -- that's the excitement for me."

In addition to highlighting theater in San Diego, the book supports the local performing arts community monetarily as well. Roughly $5 from the sale of each book will benefit the San Diego Performing Arts League's programs. The SDPAL is a not-for-profit organization created to support and promote the performing arts. The money isn't specifically earmarked, said Stephanie Casenza, executive director of the SDPAL, but will go where the need is greatest, likely the league's arts and business programs.

In the works, said Jacques, are two more volumes of his photography, covering local dance and musical performances.

For now, though, he is content to be back behind the camera -- being in the spotlight himself makes Jacques a little uncomfortable -- observing the local theater scene expand and mature.

"What's phenomenal to me is to watch the quality of theater," he said. "The quality has always been strong, but it's grown so much. The theaters and actors have said they're going to respond and keep growing, and take their craft to the next level. And I've had to do the same thing. I've had to really be on my game, because I don't think anyone in the country has done what I've been able to do -- to record one community of theater and really be part of that."

"The Play's the Thing," published by El Cajon-based Sunbelt Publications, is available for purchase online at www.sunbeltbooks.com, at the ARTS TIX booth north of Horton Plaza and in local bookstores.