If you don't know who Sylvia Rivera is, or moreover, don't know the cultural significance of Stonewall, then Jade Esteban Estrada's show might be for you. 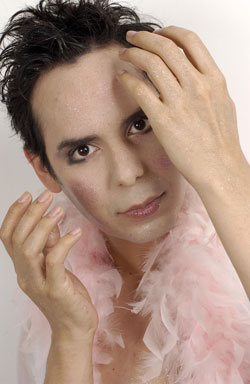 Latino pop star, entertainer and pedagogue Jade Esteban Estrada performs his one-man show, "Icons: The Lesbian and Gay History of the World, Vol. 1," at the Adams Avenue Studio of the Arts, through Sunday.

Part history lesson, part politics, part musical and all entertainment, Estrada's "Icons: The Lesbian and Gay History of the World, Vol. 1" takes an insightful and seriously funny look at several gay icons throughout history. The 29-year-old Texas native performs the one-man, six-character show at the Adams Avenue Studio of the Arts through Sunday.

For Volume 1 of "Icons," Estrada channels Sappho, Michelangelo, Oscar Wilde, Gertrude Stein, Rivera and Ellen DeGeneres. Part of the fun of the show is watching Estrada transform into each character on stage, stripping off the garments of one person to step into the clothing of the next. With the donning of a wig and the beat of a drum, Estrada's shift in persona is complete, absolute -- and in some cases, radical. When he becomes Stein, for example, Estrada's body stoops into a slow shuffle and his face twists into a curmudgeonly old woman's. It's just as dramatic when Stein dons Rivera's ultra high heels and struggles into a tight-fitting outfit.

Even during the singing Estrada stays strictly in character, modulating the style and his robust voice to fit each personality. So classical poet Sappho is lyrical and sweet, Michelangelo is passionate, Oscar Wilde is Vaudevillian, Stein is solemn and severe, Rivera is defiant diva and DeGeneres is wacky entertainer.

Gay Latino pop star Estrada is also a dancer, choreographer, actor and writer. He penned the lyrics and music used in "Icons." He regularly appears in Comedy Central's "The Graham Norton Effect" and has performed in Pride festivals worldwide, including San Diego's own in 2003. Estrada gets to use all these talents in "Icons."

He is also a history buff that says if he hadn't become an entertainer, he probably would've gone into teaching.

Rivera and Stonewall, for instance.

A bit of history: In 1969, policemen raided New York's Stonewall Inn, hoping to arrest individuals for engaging in then-illegal homosexual acts. A 17-year-old Puerto Rican drag queen threw a high-heeled shoe at the cops. Rivera's single act of rebellion triggered riots that lasted for days and an uprising that had profound cultural and political implications. But even many people within the gay, lesbian, bisexual and transgender community are unfamiliar with Rivera and what's often considered the turning point for the modern gay rights movement.

Because of its content, "Icons" is an inherently political show, said Estrada. Along with entertaining audiences, he hopes to educate them to the struggles and triumphs of the GLBT community. At the very least, he aims to make gays more visible within mainstream culture.

"I'm not holding signs in front of churches; I'm not getting married -- I'm having a show. You come see my show, you don't see my show, it's all good," he said. "But if you know that my show is listed in your city, and you know that its present, that's a tiny, tiny little thing in the mind of a straight person who's never met a gay person that goes, 'Oh, there they are.'"

But the show isn't just about gay identity and history. It is also about humanity, diversity and finding balance in our lives, said Estrada. In one of the performance's most poignant moments, Stein delivers the line: "Don't get caught up in this gay activism; we're all in this together. It's not a gay thing, it's a human thing."

That's Estrada's take on it, too. "My show is for everyone. Gay, straight, old, young, black, white," he said. "It's a reaffirmation that the more you look at people's differences, the more you realize that we're all the same."

Estrada will be back in San Diego in 2006 with Volume 2 of "Icons," covering Alexander the Great, Queen Christina of Sweden, Susan B. Anthony, Billy Jean King, Harvey Milk and Sept. 11, 2001 hero Mark Bingham. And if you're still musing on Susan B. Anthony's inclusion on the list, you'd better see that show as well.