Beneath the surface, 'Parting The Sea' mixes light and shadow

Fairy tales have historically contained a touch of the menacing along with the merry. Think of the original Brothers Grimm's tales, before they were rewritten as saccharine stories for children. The tales also usually contained mythical characters, social criticism and a moral. 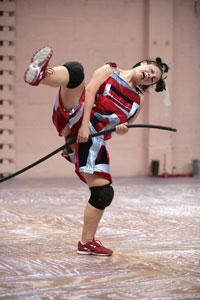 Eveoke Dance Theatre's artistic director, Gina Angelique, kept these various elements in mind when she set out to create her original fairy tale, "Parting the Sea." The new show draws on the myths of Sisyphus and Narcissus, while addressing contemporary border issues, limited natural resources and what it means to be a responsible world citizen.

"I love that kind of dense subject matter, where there's definitely light and brightness, but there's also a dark shadow side," Angelique said in a recent interview. "That to me really makes an interesting and intriguing fairy tale."

"Parting the Sea" is the story of a child who encounters two wondrous beings, and her attempts to maintain them as her own personal playmates. The creatures -- each half of one being -- obsess over each other and strive toward wholeness. The child builds a barrier between them so that she can have each of them for her own, without the complication of their mutual love.

Meanwhile, Sisyphus keeps rolling his rock and Narcissus appears again and again before the Hindu goddess Durga to inquire, "Am I myself?" Each time he is rebuked and blown away. In Greek mythology, Sisyphus was compelled in the underworld to roll a big stone up a steep hill. But each time he nearly reached the top, the stone rolled down, and Sisyphus had to begin all over again. Narcissus was the beautiful youth that became so entranced by his own reflection in the river that he pined away with desire.

The child's barrier works for a little while, but eventually she needs something sturdier. She convinces Sisyphus to give up his rock so that she can use it to permanently separate her playmates. The show considers how the forced separation affects the two creatures, and what the child eventually learns about happiness and wholeness.

In typical Angelique fashion -- the choreographer and dancer is known for her socially conscious work -- there's more here than meets the eye. She compares the work to a "gorgeous cabbage," with multiple layers of textured complexities.

Much of the inspiration for "Parting the Sea" came from a photographic project by Maria Fernandez, an immigrant and mother of four. Over the past five years, Fernandez has documented "la frontera," focusing on the U.S./Mexico border fence as a canvass. Her photographs are detailed examinations of the fence itself, the textures, colors, objects and art installations that have altered it over the years.

"I was pretty much flabbergasted, in the sense that both my heart and mind were immediately ticking very fast," Angelique said of Fernandez's work. The evocative photographs -- she described one as a mother's-eye view of the border fence trailing into the ocean -- connect the land, earth and environment to the human-made structure.

Angelique said she respects the importance of borders and boundaries to civilization. Still, "Parting the Sea" plays on the idea of how humans divide the earth's resources, and how resources have often become the rationale for war.

"I was just interested in how we we're creating this fairy tale within this world context on how we take ownership over earth and how we make decisions in regards to the earth," she said.

It is also Angelique's vision of the current political landscape. There are those who carry the burden of trying to change the world, "constantly rolling the rock, and really trying to making choices in regards to the whole world," she said. And then there are those who make more narcissistic choice in regards to themselves. "They both symbolize polar opposites, especially in this country and the context in which this work was born. And that was important to me, because I like work to be very timely."

But whether you stand back and enjoy the beauty of Eveoke's "gorgeous cabbage" or peel back the outer flesh to reveal deeper meanings, Angelique seems confident that audiences will connect to "Parting the Sea." She described it as an accessible show that embraces viewers while offering challenges to those who want to dig a little deeper.

"Just as a story itself, it's very engaging, entertaining, unique and imaginative, and nonintimidating. But there are many, many layers to unpeel," Angelique said. "And as with most my work, I hope even if you take it at the surface story level, some of the images stay with you and mean something more as you recapture them in certain areas of our lives."

The performance mixes hip-hop with butoh and modern dance. It features Erika Malone and Nikki Dunnan both as half of One, and Yvonne Hernandez as the Child. Butoh dancer Charlene Penner, whose slow-moving dance form is based in meditation, is Sisyphus. Anthony Rodriguez, who moved through Eveoke's education program, makes his company debut as Narcissus.

The show opens Saturday at the Old Wonder Bread Bakery downtown, and runs through March 26.

Dates: March 5 through March 26; Pay-what-you-can performances Thursdays and Sundays, one hour before curtain

Show times: Thursdays through Saturdays at 8 p.m.; Sundays at 2 p.m.

Talk Back: Send a Letter to the Editor

Subscribe to The Daily Transcript. On Your Doorstep. From $2.86 a week.