Linda Faigao-Hall's "Woman From the Other Side of the World" is a sort of lesson in cultural relativism. The play, which opens Sunday in a production by the Asian American Repertory Theatre, examines the mingling of Filipino and American cultures. 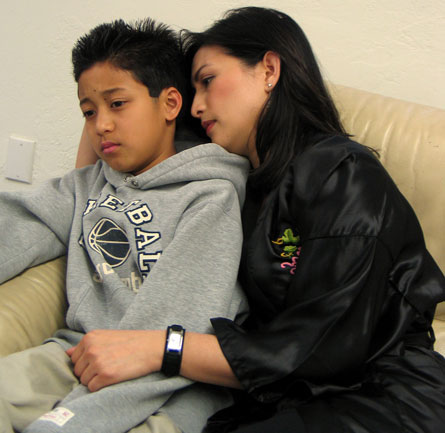 Shannon Blas and Kevin Belisario play mother and son Filipino immigrants in Asian American Repertory Theatre's production of "Woman From the Other Side of the World." Photo: Angie Chan

The seriocomic play focuses on a Filipino immigrant named Emilya who settles into bustling, urban life in New York with her 10-year-old son. When her brother in the Philippines sends a yaya, or nanny, to help care for the boy, Emilya becomes troubled with the nanny's indigenous beliefs and increasingly odd behavior. Ines, the yaya, has come with an apparent hidden agenda to stir up spirits from a past that Emilya denies, along with her heritage.

"Ines brings with her mystic powers. She's a shaman, a spiritual healer," explained George Ye, director and AART resident artist. "She not only reminds Emilya of home, but makes her deal with memories because she's bringing part of her home and culture to the Manhattan apartment."

With the play's supernatural aspects, Ye said, "Woman From the Other Side of the World" will call on audiences to suspend their disbelief -- or dispense with it altogether. Filipino folklore and mysticism are integral to the story, culminating in an onstage exorcism (think of a rather benign laying on of hands, not the projectile vomiting and head twisting of "The Exorcist"). The play explores the mystical and the rational, the indigenous and the modern -- elements that clash when viewed from a Western perspective, but which are embraced without contradiction in Filipino culture.

"I really loved writing this play because it illuminates the kind of problems you have if you're born and bred in a culture that's very different from this one, and yet you've been here long enough to assimilate the sensibility of this culture," playwright Faigao-Hall said in a recent phone interview from New York City.

"That's what I deal with, the collision of two sensibilities. I think it's very important to try to understand them because the borders are down," she said. The world is shrinking, she suggested, and we live in increasingly diverse neighborhoods. "You have to understand what's going on. You can't be insular anymore."

While the notion of straddling two cultures and fighting to maintain a sense of identity is a common theme among Asian American playwrights, Ye believes the play's bigger themes of reconciliation, coming to terms with truth and history, and the importance of family will resonate with audiences, regardless of ethnicity.

"The thing that attracts me to the play -- and any play I work on -- are the universal themes," said Ye. "The themes in the play will apply and be engaging to a lot of different people of all different backgrounds."

Indeed, Faigao-Hall said she wrote the play for a diverse audience.

"It's not much fun writing Filipino stuff for Filipinos. I write with a Western sensibility," she said. "It's really an attempt to explain Filipinos to other cultures."

At the end of the play -- which both director and playwright danced around, unwilling to disclose -- Emilya, the protagonist of the play, does come to terms with her past and her dual identity as Filipino American. But some ambiguity is written into the ending, and the playwright leaves audiences with new questions to ponder about just how far to take cultural relativism.

"I don't romanticize indigenous culture. Even though Ines is a shaman, I don't romanticize that," Faigao-Hall said. "We find out the reason why Emilya left (the Philippines) -- she was part of culture of tradition and obedience, all those things that feminists want us to look at."

"It doesn't close with a nice Hollywood feel. But it is very compelling," he said. "It raises questions, but there's gratification in it."

"Woman from the Other Side of the World" closes AART's 9th season and runs through May 7 at the Playhouse on Plaza in National City.

PROGRAM: "Woman From the Other Side of the World," by Linda Faigao-Hall, directed by George Ye