Transformation is one of the most common and characteristic themes in Greek mythology, while water is one of literature's most potent metaphors. It's appropriate that the theme and the form should come together in "Metamorphoses," Mary Zimmerman's touching, whimsical and often very funny play based on Ovid's transformation myths. 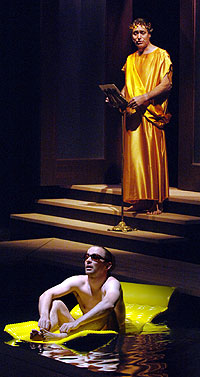 Nick Cordelione (foreground) and David Cochran Heath tell the story of Phaeton and Helios, one of the many mythological tales in Lamb's Players Theatre's production of "Metamorphoses." Enlarge Photo

The water in Zimmerman's 2002 play gets a lot of attention. "Metamorphoses" is staged in and around a pool of that most elemental of substances, highlighting the fundamental humanity of these tales of punishment, doubt, greed, loss, vanity, generosity and love. But it's not merely a gimmick; water is formless, endlessly changeable, both life-giving and perilous -- it's the perfect metaphor for a play about shape-shifting and permutation.

The San Diego premiere at Lamb's Players Theatre is a spare, gorgeous production with a limber cast of nine that metamorphose into a host of characters in nearly a dozen mythological tales.

Ovid's "Metamorphoses," a 15-book collection of Greek and Roman myths, is a history of events starting from creation. The LPT production also begins at creation -- with the pool as obvious stand-in for primordial sea.

The play begins with some Ovidian poetics delivered in the lofty, ceremonious sort of speech that actors seem compelled to use to invoke the ancient Greeks. But the "Greek speak" doesn't last long; though there are flashes of it throughout the play, the LPT ensemble mostly warms up to a conversational, storytelling tone. Part of the appeal of Zimmerman's play is that the ancient stories are told with a fluid mix of the modern and the classical.

So Midas, with the golden touch, is a billionaire businessman in a suit, and the story of Eros and Psyche is retold in a question and answer format. In one of the best scenes, we get an updated, hilarious version of Phaeton who recounts his tale to a poolside psychologist while reclining in a float. Nick Cordelione as Phaeton, in bright yellow swim trunks and dark sunglasses, plays a petulant, sulky boy who just wanted to take dad's cool car out for a spin. Cochran Heath also adds delicious humor to the sequence as Helios, a vision in flowing orange garb, singing his lines in a deep, faux operatic voice.

The graduated wading pool at Lamb's Players Theatre runs about six inches at one end to a foot and a half at the other. Wooden planks border the water, and unlike other productions of Zimmerman's play, there's no "soak zone" here.

The players' movement in the water approaches dance under Robert Smyth's direction. When Poseidon grabs hold of Ceyx's ship and oarsmen, dashing them violently into the sea in slow-motion choreography, it is a scene of beautiful and tragic physicality. And when Chrissy Reynolds-Vogele as Myrrha, the young woman cursed to love her father in inappropriate ways, dissolves as a teardrop, it is among the most affecting and tricky performances of the play. Reynolds-Vogele consistently gives a standout performance among a capable cast.

Other tales you'll recognize include that of Eurydice and Orpheus, who travels to the underworld to plead with Hades for the "loan" of his wife. Eurydice is returned to him upon one condition, that he not look back at her until they are past the gates. We know the ending, and it still fills us with pathos. What you might not recognize is the Rainer Maria Rilke version that follows. Taken from Rilke's poem "Orpheus, Eurydice, Hermes," it is a provocative re-imagining of the story told from Eurydice's perspective, and suggests another kind of mutability -- that of storytelling.

Even the sequences that aren't as effective -- Ceyx and Alcyone as lovers separated by death who are turned into kingfishers -- contain moments of inspiration -- alarm clock-wielding Iris visiting sleep-inducing Hypnos.

Deborah Gilmour Smyth's original music and Nathan Peirson's lush lighting design deserve kudos for setting the play's moody, ethereal and fanciful tone. Costume design by Jeanne Reith is simple and lovely in its modern and classic flavors, with some whimsical designs, like the psychedelic orange of the rainbow goddess and the stringy dark tatters of hunger personified.

This magical "Metamorphoses" will appeal to both lovers of Greek mythology and those who slogged sleepy-eyed through Edith Hamilton's book in high school. Lamb's Players Theatre scores with a production that is funny, achingly fragile, affecting and most of all, human.